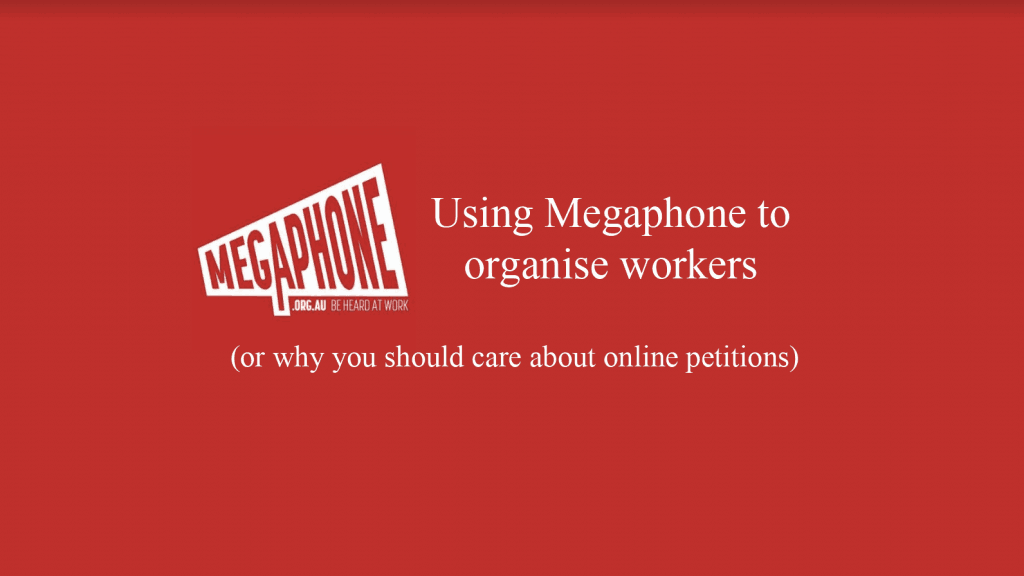 Learn from Moira Cully’s (Data Organiser at the Victorian Trades Hall Council) experience of online petitions and in particular using Megaphone, a petition platform for the Australian union movement and their supporters. Moira shared her key learnings at a workshop called Up Your Digital Game at Progress 2019, Australia’s largest social change conference.

Note: This text is an amended version of Moira’s speaking notes. You can also view the slides from this presentation.

Why do they work?

This last one is the part I want to focus on today. I want to talk to you about Megaphone – the petition platform of the Australian union movement. Megaphone is run out of Trades Hall here in Melbourne. We’re proudly union-run and unlike some other platforms, we only accept petitions that are progressive and have union values. We work in partnership with union members, unions and NGOs to run campaigns that will improve the lives of working people. In less than 4 years we’ve had nearly half a million people sign petitions on Megaphone.

What Megaphone can do I want to talk you through a brief example of some of our recent work around organising delivery riders – like UberEats or Deliveroo riders. It’s pretty clear that there are huge problems with exploitation going on in the industry and that unions can play a role in empowering workers to fight back against that exploitation. Going back a few years, the first step for us was identifying not only supporters who care about the gig economy, but also workers who are in the industry. How can we find those workers, especially in an industry where they’re dispersed and don’t have a common workplace? One place that we can start is by finding them online. This Megaphone petition was started by Alison who worked for Deliveroo, in partnership with the Transport Workers Union (TWU). There are a few key things that we’ve learnt about best practice petitions – using Alison’s case as an example.

They don’t necessarily need lots of signatures to win.

We’ve won campaigns in the past with just a few hundred signatures on a petition if the target isn’t used to campaign pressure. Or if your campaign is very specific to an issue in one workplace or one industry you might only get a small list of people, but you know that all of those people are invested in your issue. In this case, we wanted to cast quite a wide net to start to identify a group of people. So this one has a decent amount of signatures – not heaps but enough to start that work.

Practically, there’s no point doubling the work and fighting for signatures and space in people’s inboxes. We know that we’re stronger when we act together and this goes for online as well. Why have 5 petitions with 10,000 signatures each when you could have one petition with 50,000? That’s a lot more powerful. The important part of this is that by acting collectively in starting the petition together, this has to have follow through as well. So we will always give unions the list from petitions they’ve started. And we will send future campaigns on issues to a broader list, so everyone benefits.

Workers should be front and centre of campaigns, even online.

There are a few parts to this. Firstly, you can see on this petition it’s clearly from Alison and there’s a photo of her here on her bike. Secondly, the story that Alison is telling about being exploited by Deliveroo is much more compelling than me starting a petition with general facts and figures about delivery riders.

We know that stories move people to action, not facts and figures. So we tell Alison’s story on the petition and in all of the content that we’re pushing out asking people to sign the petition. Both of these things are important in making sure that the campaign has an authentic and compelling voice. It needs to be backed up by grassroots action as well – people aren’t stupid, they can tell when a campaign is superficial.

Digital is only part of a campaign.

Megaphone is just one tool that you can use to start identifying people to take further action. Petitions are just one tactic you can try. It has to all fit together into a broader strategy. Going back to the petition you can see here there are checkboxes for ‘I’m a rider’ and ‘I’m a former rider’. The other thing on the petition form here is this field for occupation which is on every single Megaphone petition. This is key for the next step in our plan to identify people to take further action – we need to work out who are the workers and who are the people that just want to support the campaign. This is important because we want to be able to treat them differently and ask them to take different kinds of actions.

Have a ladder of engagement plan for supporters.

We send emails to the Megaphone list asking them to take different actions largely based on their past behaviour. For example, a survey on the gig economy asks for people to identify as riders – via email but also via Facebook. We have a list of people who we know are either delivery riders or former delivery riders based on what they’ve told us. So we used custom audiences on Facebook as well as lookalike audiences to ask them to take part in the survey which does a number of things – firstly the information can be used in the government’s gig economy enquiry. Secondly, it helps organisers to start to map the workers – what are the key issues, who is angry about what, who might want to join a group or even lead a group. By pulling together the list of riders and the survey data, organisers in the gig economy team and workers are building a group of delivery riders.

The other part I want to touch on quickly is about sharing these tools with workers so that they can run the campaigns they want, and to build trust with groups we’re trying to organise. Just from this petition and one list of data, we’ve built up a group of delivery riders who are organising their community, we’ve got a list of potential members, we’ve got a list of people who support them, we’re raising money for injured delivery riders, we’ve made a submission to the gig economy enquiry. There’s obviously still a long way to go and a lot to learn. But next time someone tries to tell you that online petitions are just clicktivism you can tell them they’re wrong.

From this petition but also from our work on Megaphone more broadly there are a few key lessons:

View the slides from this presentation.