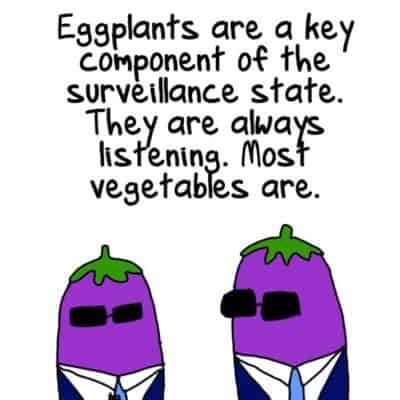 Surveillance eggplants from First Dog on the Moon.

CounterAct encourages the progressive and radical movements on the Australian continent to get better at digital privacy and security… essentially putting less of ourselves out into the interwebs for our opposition for free.

Government and private companies collect data on activists – this has been demonstrated many times over the years. Activists working against fossil fuels are an example of people that have been targeted – innocuous peaceful activities have been reported on by expensive contractors, we have been spied on, had groups infiltrated by police and corporate spies. In the UK, long term undercover policing resulted in women having long term relationships and even children with police spies. Whilst we are not aware of such extreme cases in Australia, it is not something to take lightly, but its also not something that should stop us from acting for social and environmental justice.

The most successfully disruptive aspect of surveillance is encouraging paranoia and making life hard for activists, so don’t let em stop you – you can be the proud owner of an ASIO file along with so many other awesome folk. Guaranteed every high profile activist you have looked up to was probably monitored by the government!

So let’s get into some good security habits. Here is a quick rundown of some tools that will assist your communications to be more secure. The catch – nothing is fool proof, but getting into good habits, makes for a healthier group culture.

Security culture is simply a set of practices that limits the ability for government or opponents to find out more information about you and interfere with or monitor your group. We’ve given you some tools to minimise this.

Please note tech is ever evolving – these are our top picks for 2019.

We used Nord VPN but found it slow. We now use Vypr and find it quite fast and flexible and it was recommended to us by people who live in countries where human rights defenders are at risk of being killed, and need to obscure information about themselves. Good enough for us. All activists should use a VPN (for phone and computer) that is not connected to a five eyes country (explained more below). This article discusses Australia volunteering to share citizen data as part of the Snowden revelations. Here are a list of VPN options.

This is damaging as a general habit, but with the level of detail able to be obtained by google, who know what you watch (youtube), search for, read, where you go, how long you are there, your personal habits (google maps and location tracker) – it is a significant amount of data to cross reference about you, and your friends, and fellow activists who you are exposing.

There are no completely equivalent services to the full useability range of google but there are some good compromises.

We have deliberately chosen tools that we have used ourselves and found relatively easy. Other lists like this would include encrypting your whole computer, and using Tor. They need a little more explanation. There are other tools out there, but often tools that are designed by digital security geeks, may not be optimised for a lower level of competence. We figure if we can learn this stuff from scratch – anyone can 😊

Rather than being frustrated that safer tools don’t provide the level of ease and capacity that google does, its better to remember that we didn’t always have access to these tools, managed to organise before without them, and consider the very real risk we are opening ourselves up to by handing detailed data and profiles on people over to google, and therefore the government, on a plate. Keeping lists of people who are doing direct action or even low level political advocacy in google places them at risk. We also don’t know how the political situation will change in future, particularly as climate impacts take hold, along with more resource insecurity and unstable governance.

Also, the Australian security services get a very large budget, and very little oversight. Even members of Parliament have gotten little access and understanding of the infrastructure of our surveillance state. Why do the work for them? At least make them work harder for the information on us! We haven’t yet mentioned facebook which is a huge issue in itself, but there are steps you can take to minimise your risk. At a minimum, never use facebook or google as logins to other accounts – it just gives more data for cross reference. There is a project calling for accountability post the Cambridge Analytica scandal and we’ve shared some tips for risk minimisation and a broader list of security resources here.

In Australia NGO’s, progressive and radical groups can be very blasé about data and digital security, and also the duty of care that should come with keeping huge amounts of detailed supporter information safe.

At CounterAct we want to model better practices and encourage people to take digital security more seriously. We will be offering webinars on this subject, writing more resources and can run workshops for your groups.

As always – its important to acknowledge that people of colour and Aboriginal activists are more likely be surveilled and treated as a risk by our police and government. We are happy to offer free training to any of these groups as part of “paying the rent”.

If you find our resources useful, please consider chipping in to become a monthly donor – we rely on our supporters to do this work! Thanks as always to First Dog who is much better at drawing than us, and has created Brenda the civil disobedience penguin, as our patronus.