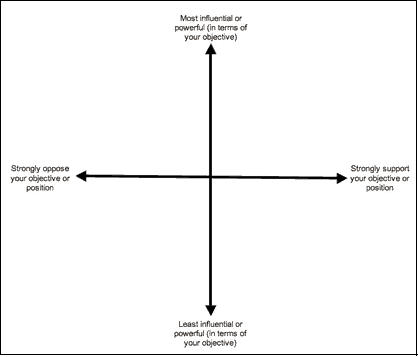 Diagram of a power map.

A process guide to be used in training workshops and planning sessions to develop campaign strategy. Download a printer friendly PDF of this guide.

In pairs/threes:
1. Think of a campaign you are involved with (or might become involved with). What is it you are trying to achieve with this campaign?

2. Briefly describe your campaigns to each other.

4. With this outcome in mind, write on the cards provided the names of organisations and people with whom you might need to engage in order to achieve this outcome. Start with yourself and the main decision-maker/s. You might like to include:

Each group needs a blank power map on butcher’s paper. This is a simple matrix with a horizontal axis and vertical axis. The vertical axis indicates the level of influence or power each person or organisation has to give your group what you are asking for. The top of this axis is where you would place people or organisations that have most power or influence. The horizontal axis indicates whether people support your group’s specific objectives or if they are opposed to these objectives. At the left end of this spectrum are people who are most opposed to your desired changes or objectives. At the right end are people who support your objectives most strongly.

5. Place the card or post-it note with the name of your organisation on the power map.

6. Identify the organisation or individual holding the most power in terms of delivering your desired outcome. Place this card or post-it on the power map, leaving some distance between the two cards.

7. Place each card in turn on the power map. As you place them down, say something about how they are related to your organisation, to the main power-holder and to each other. How much influence do they hold? Do they cooperate with each other or are they in conflict? Do you presently have a relationship with these people? Are they likely to agree with your position?

8. When your map is complete, identify the two or three locations within the map where you feel your campaign might effect the greatest influence. Are there people or organisations who hold power and who you might successfully influence?

Download a printer friendly PDF of this guide. Download a basic MS Word template to fill in your own power map.