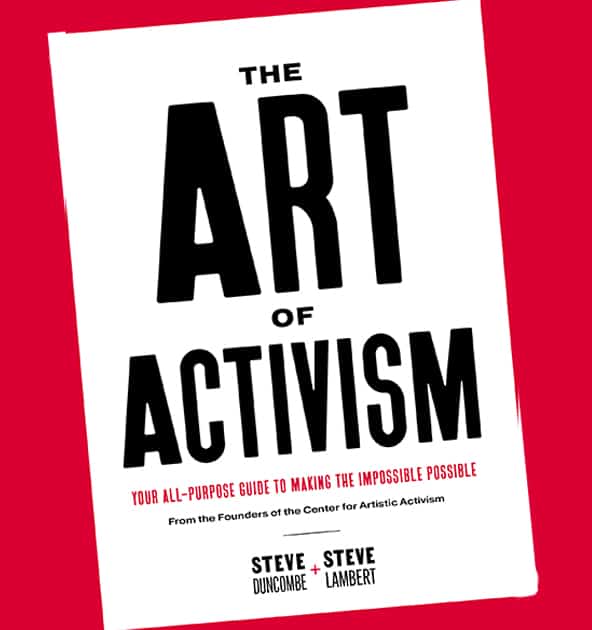 How Artistic Activism can move us Toward a Better Future

A new book called “The Art of Activism” provides a deep dive on the process, principles, history and practice of artistic activism. This article was originally published on Waging Nonviolence.

One of last year’s major highlights for me was participating, as training director, in the launch of Beautiful Trouble’s new website. We pulled together over 10 years worth of creative activist resources, including multiple books, a strategy card deck, a web toolbox and creative campaign incubator — along with an international network of artist-activist-trainers helping grassroots movements become more creative and effective.

Still, when it comes to supporting activists in using arts and culture more effectively and strategically, there’s much work to be done. That’s why, I was also excited to see the release of another important resource last year: “The Art of Activism: Your All-purpose Guide to Making the Impossible Possible” — a new book from our compatriots Steve Duncombe and Steve Lambert, founders of the Center for Artistic Activism.

From chapters on developing your own artistic process to the critical role of persuasion, the Steves (as they are often called) make the case that art needs activism and activism needs art. As a longtime “hard core” activist/artist myself, that’s an argument I can get fully behind. However, “The Art of Activism,” which includes an accompanying workbook for developing your own creative actions, is not for the faint of heart. The Steves are both college professors, and it shows — in that the book/workbook could be the basis for an intensive college course.

The text builds on and incorporates earlier learnings and examples in later chapters. Consequently, I recommend reading from start to finish, not jumping to any random chapter. As for the workbook, the exercises are numerous and wide ranging — with some demanding a significant amount of time. (Spoiler alert: It starts with a variation on one of my favorite ways to get training participants doing something physical, as proof of commitment. Many nonviolent action trainings use movement, sculpting of bodies or simply stepping in/out of line or circle to help bind participants to the process.)

Within corporate boardrooms, electoral campaigns and prayer circles, everyone recognizes the power of a good story. “The Art of Activism” wisely opens with a batch of them — including the Undocubus, Operation First Casualty, Zapatista Airforce, Dow Cares — to illustrate what artistic activism is. Later on, in one of the most illustrative chapters, the Steves offer six deeper dives on historical movements, from early Christianity to the United Farm Workers to ACT UP. Each serves as fertile ground for teasing out the valuable principles of effective artistic activism — or what the Steves call “æffective,” which loosely translates into action that is able to both affect emotion and have transformative effects on the world. In other words, æffect “marries the creative force of art with the concrete results of activism.” It is the powerful and driving vision of the book.

Of course, many people share this same goal, whether it’s public relations mavens trying to sell products or behavioral social science trainers trying to change behaviors. Still, for activists and those who study nonviolent action, it’s a bit more nuanced.

When art and culture are integral parts of our activism, we can do the work and change the world, while having more fun than the other side!

Accommodation and nonviolent coercion are just as likely (if not more so) to lead to success. One reason is because they don’t rely on changing an opponent’s thinking. So, while æffect may be a northstar — a valiant and possibly most desired outcome — it is neither consistent with, nor required for, winning or making change.On the one hand, this concept of æffect seems to be very much in alignment with the Kingian principle that “Nonviolence seeks to win friendship and understanding,” or the Gandhian approach that considers winning the hearts and minds of opponents as true victory. After all, appealing to — and believing in — change through ethical, moral, emotional processes is a critical piece of the work. However, on the other hand, a Sharpian or strategic approach would see conversion as but one possible outcome. Others include accommodation — which is when the opponent doesn’t agree with the protesters, but recognizes it is too costly to continue to fight — or nonviolent coercion, where those in charge are forced to change since their power has dissolved.

This leads to a bigger issue, which is that sometimes intervention and/or high risk taking is needed to build enough power to truly disrupt the system or withdraw consent. While there is an art to disruption of systems and systemic injustice, you’ll need to consult other resources for guidance on that, as it falls outside the scope of this book. For example, in Beautiful Trouble’s toolbox, we unpack the art of disruption through exploring direct action, strategic nonviolence, prefigurative politics and revolutionary nonviolence, just to name a few modules.

The risks of resistance

Moreover, the risks of resistance are real and often significant, including arrest, exile, ostracization, loss of livelihood and harm (emotional, physical and legal). While “The Art of Activism” will not necessarily help you identify or navigate the risks of any ideas that you develop, some are mentioned in a creative — but perhaps too comforting — fashion through several stories. For example, when writing about Jesus, the Steves do mention his crucifixion. However, it’s not framed as a risk of his activism that needed to be assessed. Instead, the Steves focus on how Jesus embraced his execution as a way of teaching his followers that they needed to do things for themselves. While I completely agree that there are many activist lessons to learn from Jesus as a charismatic leader, this one didn’t land for me.

None of this should dissuade you from engaging with artistic activism, of course. As I have been known to say, when art and culture are integral parts of our activism, we can do the work and change the world, while having more fun than the other side! Additionally, at a very basic level, cultural work is perhaps the most powerful way to combat corporate insistence on homogenization — and to fight the pervasive and demoralizing messages that individuals don’t count, and that cultural differences are liabilities. 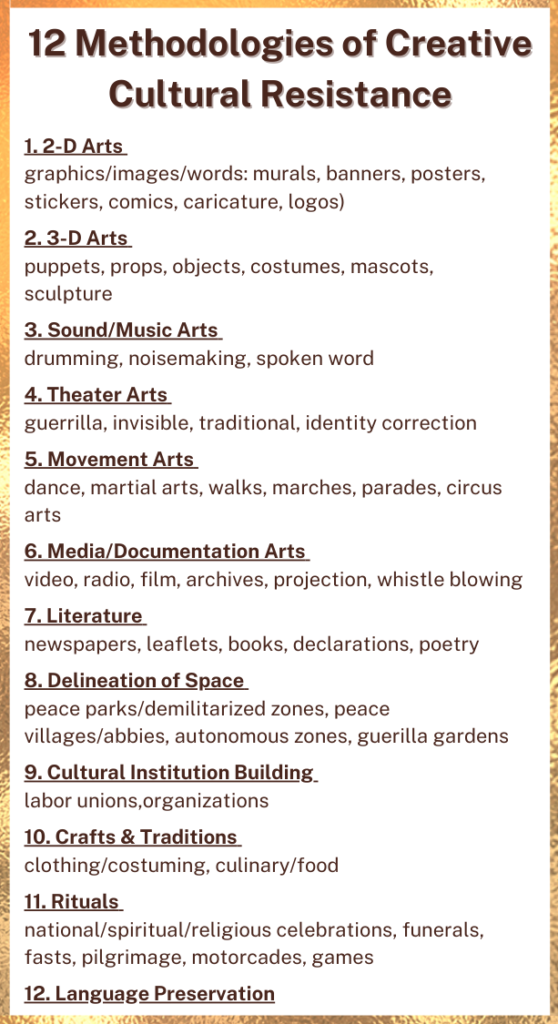 “The Art of Activism” covers a wide array of examples in trying to paint a comprehensive picture of just what activist art entails. It could be helpful to supplement these examples with a framework. For example, to support creative action trainings, I often share this handy list of a dozen methodologies of creative cultural resistance. The goal is to spark imagination and showcase the immense diversity of artistic methods that have been employed in resistance efforts.

As you might expect, since the Center for Artistic Activism and Beautiful Trouble are fellow travelers, we both start with stories because we appreciate their ability to hook and engage folks with tales of sexy tactics. We also understand and value the power of images, pop culture, meeting folks where they are at, and reaching people through emotions, not just facts. Additionally, as a rule, we emphasize context. You can’t just lift a story of people filling in potholes in Zimbabwe to catalyze a government response and apply it elsewhere expecting the same result. You can, however, take the basic principle underlying this action of shaming the authorities into doing their job and apply it in your own community.

I really appreciate that the Steves outright say “These ideas will not work for you!” in the book/workbook — just so there’s no confusion. In fact, this is often why we say that Beautiful Trouble’s superpower lies in starting with compelling stories, but not stopping there. In order to address the giant leap from one context of the engaging example story to your actual on-the-ground need for implementation, Beautiful Trouble adopted a “pattern language” for its toolbox. This pattern language provides a framework for teasing out principles, theories, tactics, and methodologies in compact and linked entries that make the most powerful learnings as accessible as possible. The Center for Artistic Activism’s online Actipedia has some of the same approach and features, but since only chapter three of the book specifically identifies principles of artistic activism, it felt noticeably limited — even acknowledging the challenges of fitting “everything” into a book.

The Steves spend a solid chapter on utopias — and push us beyond the win of a solitary campaign and toward a complete re-visioning of overall societal change.

I am often aghast at the lack of discernment about materials and production choices that are made in developing art for events. Conversations on healthier, less toxic materials and socially just production methods are missing from the book. It is worth doing things to a certain standard, of course, but there is also a need to balance art and message, as well as being able to recognize when perfectionism is getting in the way.I appreciate the book’s emphasis on artistic process and setting up a time and place to create, as well as to dive into the inner workings of persuasion and the imperative of developing a utopian vision to guide one’s activism. However, I wish that there was more integration and focus on strategic analysis and planning — more specifically, a way to understand that tactics are most often successful when developed within that kind of framework. Unfortunately, this point really only comes up in the workbook as part of its “final exam.” What’s more, artists can be solitary creatures, and it’s important to assist them in recognizing that working together with others is often an important first step toward being effective, not just æffective. (As an artist, I feel I can say this!)

The Steves spend a solid chapter on utopias — and push us beyond the win of a solitary campaign and toward a complete re-visioning of overall societal change. They note that this is hard for participants, as most activists tend to fixate on problem thinking rather than outcome thinking. This focus is energizing, because focusing on problems is not the sole proprietorship of artists and activists. It is the human condition. (Case in point: reliance on religion, the popularity of cults, substances, etc.) That’s why any support for visioning is extraordinarily powerful.

“The Art of Activism” closes with a one page chapter entitled “Action,” which essentially says “Go do it!” While it makes sense to end on an action-oriented note, it feels like some more guidance would be useful (perhaps in the form of further resources or links to implementation materials). In fact, if you read the book, do all the exercises and want more guidance on “doing it,” check out the brand new Beautiful Action Trainers Modules, or BATMo! — especially module six. BATMo! is an innovative card deck-based toolkit with 11 modules designed to support nonviolent action trainers in facilitating awesome workshops for groups and individuals striving to be the most effective activists possible. (It’s free and downloadable in multiple languages.)

If you have the capacity to learn from reading a book, the stamina and discipline to follow a workbook on your own — or preferably with a group — you and your campaign will benefit greatly from investing in “The Art of Activism” package. Thanks to the Steves, you’ll graduate with a solid handle on the process, principles, history and practice of artistic activism and how this can move us towards a better (utopian!) future.

As an activist artist, strategic nonviolent organizer, and Training Director of Beautiful Trouble, Nadine Bloch explores the potent intersection of art and people power. Find more of her writing in “Beautiful Trouble,” “SNAP: An Action Guide to Synergizing Nonviolent Action and Peacebuilding,” and “From Airtable to Zoom:An A-to-Z Guide to Digital Tech and Activism 2021.”