This is an adaption of a talk Iain McIntyre gave at Counteract’s Art and Heart gathering in 2017 in which he outlined a variety of means of spreading messages and information in a creative way through, mainly one-off, visual artworks.

Placards are a form of creative output that participants typically bring to rallies and events. If you’re an organiser then it doesn’t hurt to bring materials along so that people can also make them on the spot. One alternative is to do paintings on canvas with slogans. These can then be hung in a public place after the demonstration. Placards can also be planted en masse at choice locations for extra effect. 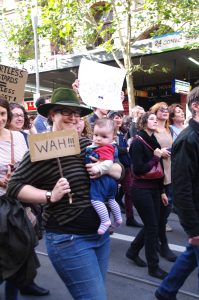 Melbourne Bust the Budget rally, May 2014. Photo by Melbourne Protests.

Placards can also be a good source of ideas for slogans and lines that everyone hasn’t already heard a million times already. If you’re not feeling particularly creative or don’t have that incredibly witty, bright spark in your group then keep your eye out for one to borrow. 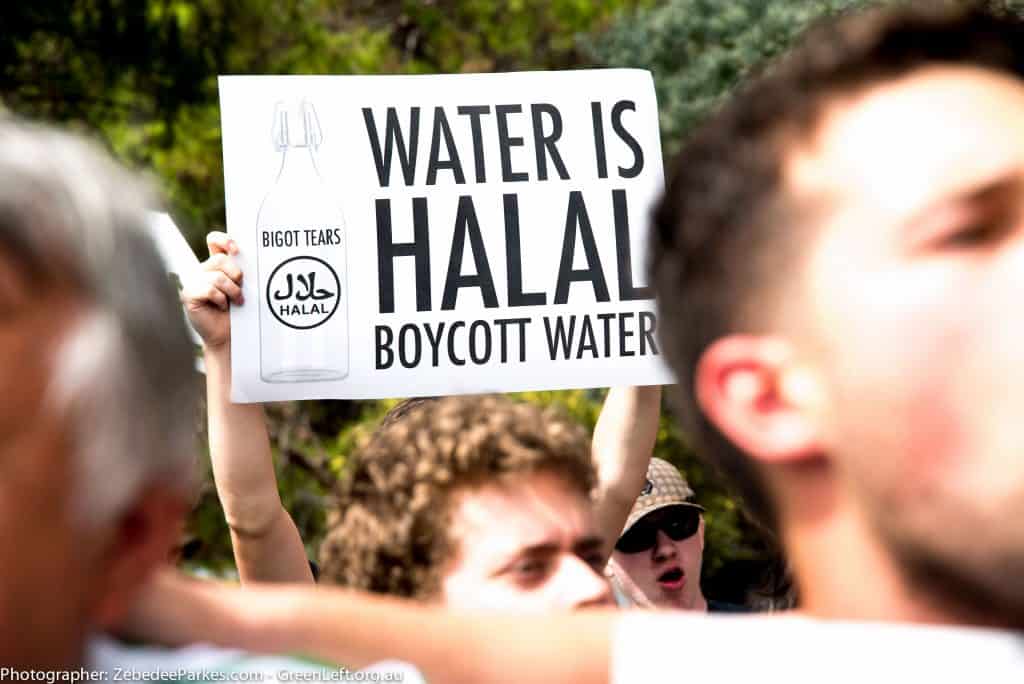 You can also get lots of people to hold the same placard or variations thereof. Having them do so at a rally or protest can be a way to emphasise a theme en masse. It can also be a way to quickly generate lots of photos of different individuals endorsing the same demand whilst including people from different places can show an issue has geographical spread. Why leave it to officialdom to decide who gets commemorated and how they are remembered? Extra points for making it impossible to tell whether it’s a council/government endorsed sign or not.

Create your own street sign or retool existing ones. People have been adding oppositional text to Stop signs ever since they existed. However the range of options is much broader, as demonstrated by the revision of Refuge Island signs around Australia via a kit produced by Mickie Quick in the early 2000s. The addition or deletion of text can make a big difference whilst using stickers and paste ups to more fully revise offending advertising material can cause people to do a double-take.

Billboard Utilising Graffitists Against Unhealthy Promotions (BUGA-UP) were the experts at taking existing billboards and modifying them to send a different message.

The Spirit of Tasmania gets a makeover on its maiden voyage, 2005.

If you’re in a position to do so you can also hire your own advertising space. Deborah Kelly produced ‘Hey Hetero’, a series of six posters that were shown in public sites and galleries across Australia and overseas since 2001. Asking around to see if anyone has a spare wall for the cause promotes longevity, but reclaiming public space can give your work another layer of meaning. Van T Rudd painted this mural at the CUB Carlton site where workers held an ongoing protest after they were sacked in 2016 and then given the option to reapply for their jobs with wages reduced to an average of 65% of what they had been receiving. After 180 days of picketing they won their positions back.

These can be artworks placed in public places or used within protests, actions and other events. To harp on with a recurring theme, placement is even more important with these as you want them to be seen, photographed, discussed and disseminated. If you don’t think that they can stay up for long then placing them in the door way of your opponent’s head office might be a way to generate extra publicity and get some great shots. 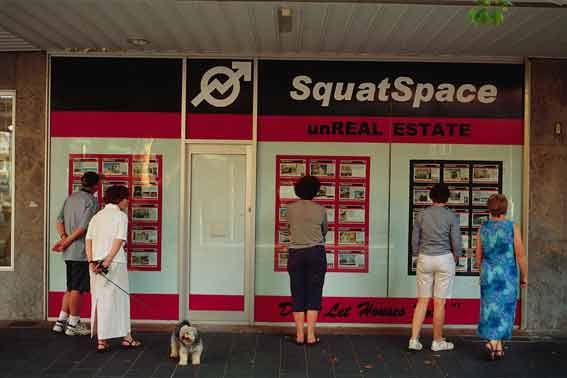 The UnReal Estate installation in 2002 highlighted the large numbers of houses and buildings being wasted in Newcastle via a property board in the Hunter Street Mall which included photos and addresses.

Once again daring placement can make even a simple and well-worn slogan attention grabbing.

Using chalk can be a way of quickly knocking out slogans and avoiding fines as well as giving people something to do during a rally. For example, this chalk graffiti outside then ALP mining minister, and soon to be mining industry lobbyist, Laurie Ferguson’s office, 2012. Dodgy graffiti can also be revised and repurposed. In the 1980s racist “Asians Out” graffiti was changed to read things like “Take Asians Out To Dinner—No Borders,” and “Asians Shout Death To Racists.”

It’s not always easy, but try to hold that beautifully and highly detailed, or simple and cleverly worded, banner taut and straight when you’re out marching lest no one be able to read or photograph it properly.

Once again, think about PLACEMENT. Good timing and considering lighting for photographs is important too. As is remembering to bring someone extra along to document things… This giant banner was hung off the side of the occupied Sydney College of the Arts Executive Administration Offices during the successful 2016 campaign to prevent the closure of the school.

Here’s another project from Deborah Kelly – just look at this PLACEMENT! 2005 Beware of the God projection. Photo courtesy of www.facebook.com/artistdeborahkelly/

EvoLens have used projection to make a point at White Night in Melbourne, utilising the large audience and fitting the tactic to the nature of the event.

Drawing on your networks, and hopefully beyond, to get people to create large amounts of artworks or copies of the same object ala Sasaki’s origami cranes be a way to easily involve large numbers in a small way in a creative project as well as demonstrate the depth of feeling around an issue. The objects can then be turned into an installation or sent somewhere individually to add up to a big impact. Alternatively objects like these pro-Marriage Equality postboxes produced by Mickie Quick during the 2017 postal survey can be a way to raise funds, in this case for an LGBTI youth camp, whilst turning everyday items into a way of advocating for change.

This can include public and privately exhibited pieces that use traditional craft methods to spell out slogans, create banners and other objects of righteous anger and beauty. This mini protest banner created by Tal Fitzpatrick was carried at the 2017 Invasion Day rally and later auctioned to raise money for Indigenous charity Children’s Ground.

It’s always good to come up with something new or an angle on the familiar. Father Rod Bower has been using the Gosford Anglican Church’s notice board to sound off on issues concerning sexuality, refugees, poverty and more for years. He’s not just delighted and scandalised passers-by either as with the aid of social media his messages have reached over 50 million people around the world. 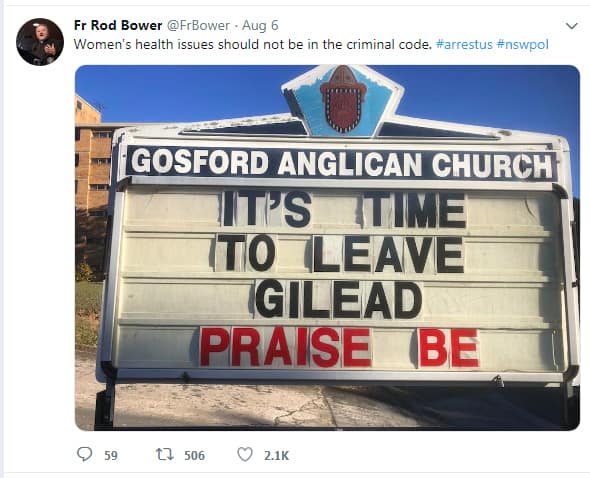