In this 2015 interview, which originally appeared in Interface: a journal for and about social movements, Lesley Wood talks with No Somos Delito spokesperson Cristina Flesher Fominaya about a novel way of protesting that Spanish activists came up with. The practicalities and possibilities of using holograms to challenge and subvert new anti-protest laws are explored.

LW: Could you describe the gag law that was passed in Spain in 2015?

CFF: The law of citizen security is part of a major package of legal reforms that represent the greatest restriction of democratic rights in Spain since the dictatorship. The law is also known as the Gag Law because it is clearly designed to target, repress and silence social movements, particularly the 15-M related protests that started four years ago on the 15th of May 2011. This law not only introduces 46 new sanctions but 15 of them violate basic constitutional rights such as the right to freedom of expression, the right to freedom of assembly, the right to freedom of information, and the right to protest. 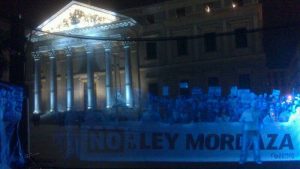 To give you some examples of the fines and their relation to 15-M type activities:

Up to €600 fine for holding an assembly in the open air,

Up to €30,000 for protesting in front of parliament, or stopping an eviction, for unauthorized use of photographs or videos of police, or for passive resistance to authority, such as a sit in or a bank occupation.

And up to €600,000 for protesting within or in the immediate area surrounding any infrastructure that provides basic services, in such a way as to create a risk to life or people, but there is no legal specification of “risk” or “the surrounding area” in the law, so it is open to interpretation. This clause is known as the Greenpeace clause, since they often protest at energy facilities, but it also targets telecommunication infrastructures, because we still have critical journalists willing to speak out, and they would like to silence these voices as well.

The law is designed to close down the space available for not only protest, but assemblies or other activities in which citizens can communicate with each other about politics and society. The law does not just target protesters though, it also makes returning migrants at the border legal, which violates their right to seek asylum, and it also includes a number of measures that penalize poverty. For example, anything that “degrades public spaces” can be fined 600 Euros, so a homeless person sleeping on a mattress on a public street could be fined 600 Euros!

Although No Somos Delito (NSD) as a platform has raised awareness about all these aspects of the law, with the hologram protest we have focused specifically on the threat to our right to protest. Because if we lose that right, we will not be able to campaign around other issues, such as the environment, migrant rights, and social injustice.

It also introduces a two tiered justice system because before you would have had the right to go in front of a judge now you are fined through an administrative process. If you want your day in court you would need to pay for that.

The irony of this law is that it is justified by alleging that citizens are demanding “greater security”, but in reality it increases insecurity by making the exercise of basic democratic rights subject to criminalization. “Security” ranks around 12th in public concerns, possible because Spain is the third least violent country in the entire European Union. The 15-M movement has been explicitly committed to non-violence from the very beginning, less than 1% of protests in Spain have any sort of incident-99% are peaceful. And the state already has at its disposal a set of laws to handle any major disturbances.

Movements in Spain have been responsible for exposing a lot of the political corruption scandals that have really damaged the Popular Party’s legitimacy, as well as stopping the privatization of public services, which the Popular Party has been aggressively pursuing, so these laws are clearly a response to that and clearly social movements are the real targets here, not any increase in security. 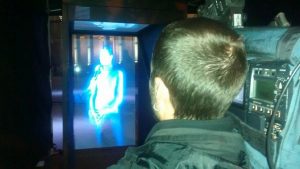 CFF: There are two aspects of the campaign, one was the webpage http://www.hologramasporlalibertad.org/#home where people from anywhere in the world can go online and leave their hologram, a written message, or a shout out. The day before the hologram protest, over 50,000 people from over eighty countries had visited the site and almost 18,000 had participated by leaving a hologram, message or shout. The idea was to integrate this participation into the filming of the protest itself.

The second part was the actual hologram protest itself, which was filmed in a location outside Madrid, and about 50 people from No Somos Delito took part in that, preparing the signs, and being filmed as holograms.

The actual protest took place in front of parliament and involved a screening of the previously filmed holographic protest, which integrated some of the messages left on the webpage in protest signs, and some of the shouts into the audio track. The film was then projected in a loop, which kept the protesters moving across the street. The scrim size and position was very carefully designed to match the exact angles of the filming so that the holograms were moving across the street. It was very eerie and beautiful.

Spokespeople from No Somos Delito and the media were there, but no one else, it was a virtual protest. It was really important that people not show up for it, because the symbolic impact was for there to be only holograms protesting, so the location was kept under wraps until the last moment. There was a black hologram booth set up so that journalists and spokespeople from No Somos Delito could do the media interviews as holograms too. Really the creative geniuses behind the design thought of everything. We do have fantastic media professionals in Spain! Fortunately, some of them are also committed to critical politics and are willing to put all that talent at the service of the movements.

LW: Who was involved?

CFF: The idea for this came from media professionals who were really concerned about what is happening in Spain.

In Spain, morning coffee with your colleagues is a sacred tradition, and on one of these mornings one of the people said to the other “The way things are going soon the only way we will be able to protest is if we turn ourselves into holograms”. So the idea was born.

It took them about four months to develop it, and they brought it to No Somos Delito completely for free, because the platform had been working on this for well over a year and had built up a lot of legitimacy, since over 100 associations are affiliated with it. No Somos Delito got involved about one month before the actual protest. The whole thing probably would have cost about 300,000 Euros, but all the equipment, labour and technical support was completely pro-bono, so it cost nothing in Euros, for us at least. This is not the first time we have had this kind of support. The production company Insolentes Bastardos (Insolent Bastards) has also filmed really high quality videos for Greenpeace in collaboration with No Somos Delito to raise awareness about the Gag Laws and the importance of the right to protest in democracy.

Internally, the campaign worked like all of the campaigns NSD do, with face-to-face assemblies, and Titan Pads to develop the different aspects of the campaign internally, plus constant Telegram communication throughout. Email and social media to communicate with other people outside the platform.

LW: What response did you get from the government?

CFF: Total silence as far as I know.

LW: What response did you get from the public?

CFF: Well, no one knew what was happening, since we staged it as a film shoot in order to get the permit!

LW: How did social media affect the campaign?

CFF: It was crucial in getting people to the webpage, in circulating the promo videos. NSD, like most active groups in Spain, have a very well organized communication infrastructure that connects between many different actors in the network.

LW: What did the campaign achieve?

CFF: The media response has been fantastic, major newspapers and magazines have carried stories on the protest, which has increased international awareness of the threat to democracy In Spain, and there have been numerous denunciations. Human Rights experts from the United Nations have determined that this law violates Spanish citizens human rights and “unnecessarily and disproportionately restricts basic freedoms such as the collective exercise of the right to freedom of opinion”, and the Commissioner of Human Rights of the Council of Europe has also expressed concern and opposition, as has Amnesty International and other groups. They made this clear before the protest, but the protest really increased the visibility of the issue.

LW: What should other folks organizing against repressive laws learn from this?

CFF: Well, I would distinguish between what they could learn from the hologram protest and what they could learn from No Somos Delito. The fact that the protest managed to be pulled off is due to the generosity and creativity of the people who designed the campaign and executed it, but they also would not have been able to give it expression without the NSD network, our activists, our spokespeople, and our extensive contacts within the movement network in Madrid and in Spain. So NSD has been really successful in building up that popular support and legitimacy, by working hard, reaching out to anyone who is also working on similar issues.

The strength of the networks in Spain really comes from a willingness of everyone to put themselves at the service of the movements, without worrying about who gets credit, etc. No Somos Delito is supported by so many organizations, from more formally organized ones like Greenpeace to 15-M assemblies like LegalSol, who offer legal analysis and support, and so many more. But it is important not to get the idea that Greenpeace and Legal Sol are outsiders offering support, they too form part of the assembly itself, they too form part of No Somos Delito, as do many other associations and collectives. This collaborative process is not without tensions, but on the whole it is pretty remarkable how well it works.

NSD had one simple objective from the start: to stop these laws. Now that the laws have been passed, we continue to work with many other people to have them revoked, by seeking commitments from political parties likely to form part of the next government to overturn them in the first six months of government, by supporting legal recourses to have them declared unconstitutional, and through many other means. Keeping the objective clear and simple, working openly with other groups and associations, experimenting with different forms of action, and maintaining a resolutely nonpartisan stance while at the same time reaching out to political parties to raise awareness about the law, I think this is what has made NSD a point of reference for mobilizing against repression in Spain

Cristina Flesher Fominaya is one of the spokespeople for the platform No Somos Delito (We are not a crime), and is also a founding editor of Interface. She also is an editor of Social Movement Studies journal, and a Senior Lecturer at the University of Aberdeen. She can be reached at flesherfomiATgmail.com.

Lesley Wood recently published Crisis and Control: The Militarization of Protest Policing. She is Associate Professor in Sociology at York University in Toronto, Canada. She can be reached at [email protected]