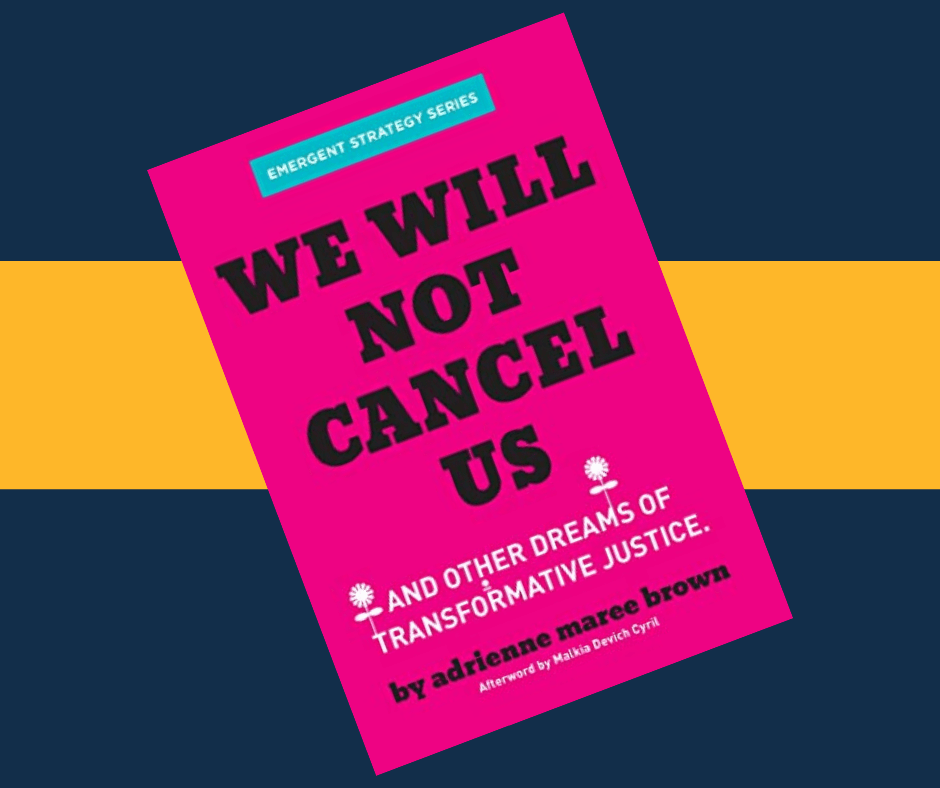 Book Review: We Will Not Cancel Us

We Will Not Cancel Us – And Other Dreams of Transformative Justice, was written by adrienne maree brown in 2020. It is a booklet that collects four short essays that, together, support the proposal that cultivating transformative justice approaches within social change movements will offer a more effective accountability process than that of ‘canceling’ individual harm-doers. As detailed below, this proposal draws on personal experiences to offer a valuable exploration of the role of constructive criticism in developing more nuanced discussions about the accountability practices we cultivate within our communities and movements.

Content warning: the booklet includes discussions of abusive behaviour (and briefly describes experiences of suicidal ideation). While this review does not go into these details, the associated concepts may still bring up difficult feelings and memories – please consider ensuring that you are in a safe location and have options for support if needed.

To appreciate the context of this booklet, it is worth briefly clarifying the uses of two key concepts: the practice of canceling harm-doers, and transformative justice approaches to conflict resolution.

The practice of ‘canceling’ is a form of boycott – a withdrawal of support for an individual/group following a set of objectionable behaviours or opinions being ‘called-out’ as harmful. The phrase cancel culture emerged as a term to dismiss the practice of canceling by re-characterising it from a form of justified-protest to that of ‘politically correct’ censorship.

“Canceling a person, place, or thing is socially mediated phenomena with origins in queer communities of color…The reference was subsequently seized upon by outside observers, particularly journalists with an outsized ability to amplify the(ir own) white gaze. Politicians, pundits, celebrities, academics, and everyday people alike have narrativized being canceled into a moral panic akin to actual harm, adding a neologic twist on the origin of the practice by associating it with an unfounded fear of censorship and silencing. But being canceled — a designation, it should be noted, usually reserved for celebrities, brands, and otherwise out-of-reach figures — should be read as a last-ditch appeal for justice.” Meredith D. Clark 2020. DRAG THEM: A Brief Etymology of so-Called “Cancel Culture”Communication and the Public 5 (3–4): 88–92.

Transformative justice describes a systems approach to identifying root causes of conflicts and responding to these as a community – including developing various harm-reduction processes to interpersonal violence at the grassroots level, rather than relying on punishment, incarceration, or policing. The video What is Transformative Justice? provides an excellent introduction and features adrienne maree brown, Mia Mingus, Stas Schmiedt, Ann Russo, Esteban Kelly, Martina Kartman, Priya Rai, and Shira Hassa (Barnard Center for Research on Women 2020).

In We Will Not Cancel Us, adrienne maree brown proposes that – compared to canceling practices – transformative justice approaches offer a more effective form of accountability within social change movements. This proposal starts by describing how all-or-nothing canceling of individuals can risk derailing the communities and movements needed for the very system-level changes that such call-outs seek. Building on this point, transformative justice approaches are presented as providing a form of accountability that supports the growth of social change movements.

It is important to note that while arguing for the value of transformative justice approaches, this is not a rejection of the practice of calling people out and holding them accountable for harmful behaviours. Instead, as Shira Hassan notes, this booklet helps ask the question “How do we align anger, believing and supporting survivors, with a values-based daily practice of accountability for those who harm us?”

This question is difficult to answer. Indeed, one of the important critical responses to an earlier version of this proposal (2018) was concern that it conflated harm, abuse, and conflict in ways that risked silencing survivors and giving abusers a way to avoid accountability. In response to that criticism, this booklet includes clarifications for some often-conflated terms associated with the question of holding people to account for their role in harms experienced by others.

In abbreviated form, these clarifications include:

In addition to reiterating the importance of both supporting survivors of harm and ensuring that abusers are held to account, this booklet also extends the original blog post by explicitly acknowledging that call-outs function as a valuable form of accountability in some contexts. For instance, adrienne maree brown writes:

“Call outs have a long history as a brilliant strategy for marginalized people to stand up to those in power… a way to bring collective pressure to bear on corporations, institutions, and abusers on behalf of individuals or oppressed peoples who cannot stop the injustice and get accountability of their own” (p.40)

“There is absolutely a need for certain call outs – when power is greatly imbalanced and efforts have been made to stop ongoing harm, when someone accused of harm won’t participate in community accountability processes or honor requested boundaries, the call out is a way of pulling an emergency break” (p.52).

However, the focus is on drawing attention the limits of call-outs – especially when used for conflict-resolution within social change movements:

To balance these perspectives, adrienne maree brown outlines a set of prompting-questions to help make intentional choices about when and how to respond to a call-out by canceling support for individuals (pp.47-49). These include, asking whether there is an imbalance of power between the accused/accuser; whether the accused is avoiding being held to account in other ways; and whether the survivor(s) are being adequately supported.

Building on this exploration of the limits of call-outs and canceling practices, adrienne maree brown goes on to highlight the alternatives offered by transformative justice approaches. For instance, from the perspective of transformative justice approaches, one of the weakness of canceling practices is the tendency to shift the focus from supporting survivors to punishing the harm-doer. This focus on punishing individuals undermines our capacity, as a community, for addressing the systemic conditions within which the harmful behaviours emerged.

“We end up putting more of our collective attention on punishing… than on healing survivors, and/or building pathways for those who are in cycles of causing harm to change”(p.50).

“We are fearful of taking time to be discerning [about when to respond to a call-out], because then we may have to recognize that we aren’t as skilled at conflict as we want and need to be, and/or that any of us could be seen as harm-doers” (p.56).

Rejecting this punitive culture, transformative justice approaches offer alternative avenues for conflict resolution within communities. Complementing this is the notion that that movements function as a practice ground for the better-futures we seek to create. Within this context, transformative justice approaches offer a way of practicing co-creation process by holding each other accountable for harmful actions in ways that reduce the potential for further harm within movements.

“We need people within our movements, all socialized into and by unjust systems, to be on liberation paths… Not already beyond harm, but accountable for doing our individual and internal work to end harm and engage in generative conflict…” (p.57).

“How do we shift from individual, interpersonal, and inter-organizational anger towards viable, generative, sustainable systemic change?” (p.70)

Given the potential for societal change that a transformative approach envisions, it is important to note that this critique of the practice of canceling individual harm-doers has nothing to do with conservative objections to cancel culture – objections that focus on disputing whether the harms attributed to a given individual justify the negative impacts of being canceled. (Note that these conservative objections to ‘cancel culture’ often function to undermine progressive social movements, much as the concept of ‘political correctness’ does.

In contrast to conservative objections to cancel culture, by drawing on transformative justice approaches, this critique of the practice of canceling harm-doers has the potential to help to strengthen the accountability practices within progressive social movements.

“I want to invite us to get excellent at being in conflict… [to] generate small pockets of movements so irresistibly accountable that people who don’t even know what a movement is come running towards us, expecting that they will be welcomed, flawed and whole, by a community committed to growth” (pp.9-10).

To illustrate this intention, this booklet includes some very personal stories about both the limits of ‘canceling’ and the potential of transformative justice approaches. When read together, this collection of experiences shows that, far from pretending to have all the solutions, adrienne maree brown is participating in the process of learning together.

This process of learning together is a critical element of the transformative justice approach. Given this, I read this booklet as documenting a valuable contribution to ongoing shared conversations. Viewed from this perspective, this collection converges on the proposal outlined at the start of this review – that transformative justice offers a more effective accountability approach within social change movements than the practice of canceling harm-doers (which risks driving them out of our communities).

This booklet does not attempt to explain how to adopt transformative justice approaches. What it does do is detail compelling arguments for the value of transformative justice approaches within social change movements. It also provides a valuable example of the role of constructive criticism in developing more nuanced discussions about how we can hold each other to account for the harms we contribute to while growing our movements and supporting our communities.