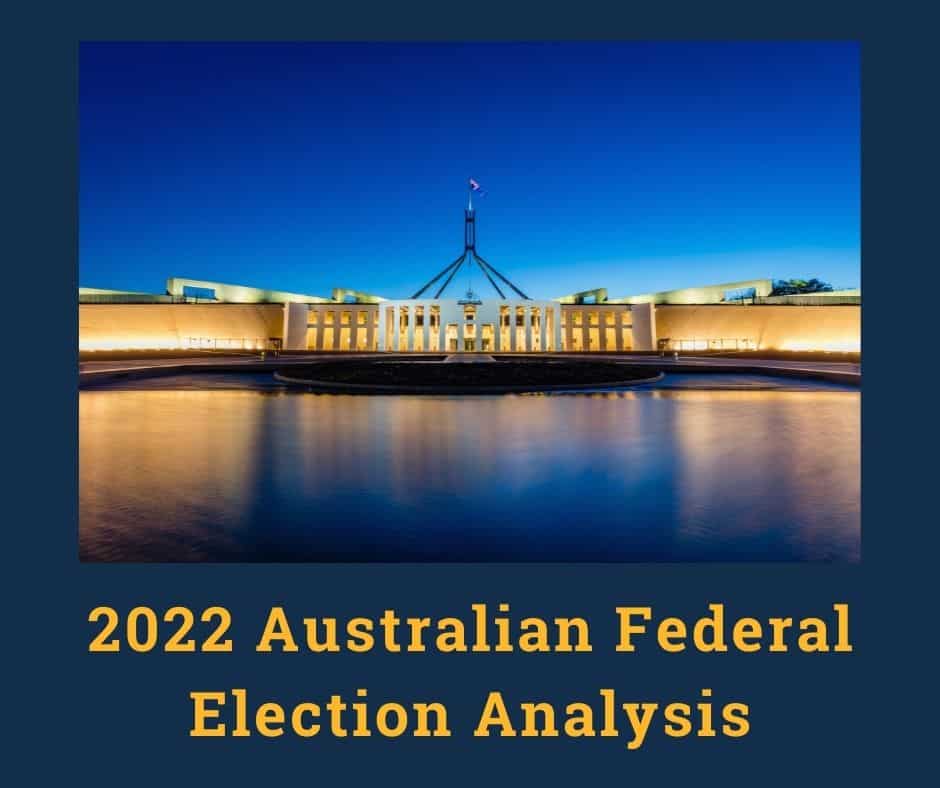 Trying to make sense of the 2022 Australian federal election and the resulting political landscape? This collection of articles will give you valuable insights.

The election results have clearly highlighted the previously untapped power of women, the impotence of mainstream media, and the fundamental importance of community and connectedness. When it comes to actual policy, one of the strongest messages from the election is that climate matters to people. – David Crosbie

The first (learning) is that climate campaigners were very successful, and this was no accident. In the vast majority of the seats where they invested most of their door-knocking and community engagement time, they won… A second important learning emerged in the electorates where sitting members of parliament lost their seats in this election. This key lesson was also reflected in the major themes that, along with concern about our climate, drove so many people to change how they voted in this election; political integrity, representation, and offering a voice for women. – David Crosbie

An examination of the data about the voters who make up different electorates in Australia, and how those electorates voted.

The combinations of these three trends — climate, the regional divide, and a seeming lack of Coalition cut-through on the economy — helped hollow out the Liberal Party’s heartland: affluent inner-city seats. What started with signals from two seats in 2019 became a teal wave in 2022. La Trobe University political scientist Andrea Carson says the seats the Liberals lost are “highly educated electorates with politically engaged constituents and strong independent challengers. Usually, it would be in their economic interest to vote for the Coalition, but we’re not seeing that this election. – Julian Fell, Ben Spraggon, Christen Tilly, Matt Liddy

The election brought a new, localised climate action campaign that began in the gloom of 2019, Annabel Crabb, ABC, 1.6.2022

Compared with election night 2019, a widely-predicted electoral wipeout in which only one seat ended up changing hands, 2022 was like a fire in a cracker factory — explosions going off everywhere. But beneath the detonations, a deep and rumbling pattern steadily became apparent: This was the election at which Australians quietly but unmistakably allied themselves with action on climate change. And the story of how it all came to pass serves as a valuable lesson in modern campaigning. – Annabel Crabb

The really fascinating thing is that it wasn’t that one party was the answer or beneficiary of that, but voters made choices across the board. When they were provided two alternatives, they chose the person they trusted to act on climate. – Dave Copeman

Will a Labor majority stunt climate action? If the government wants a second term, more climate ambition is essential, John Quiggin, The Conversation, 31/5/2022

Indeed, the strong pro-climate vote this election means a more ambitious policy will be needed if Labor is to have any hope of retaining majority government for a second term… The need for urgent action on climate has become increasingly evident in recent years, but has had little impact on Australian government policy. Action is now an electoral imperative for Labor, if it is to retain majority government after the next election. – John Quiggin

Who’s New in the Zoo: Meet the new Federal Ministers promising a shake up on Climate Action in Australia, Climate Council, 2/06/22

The Climate Council have summarised information about the following Ministers:

The federal election saw voters’ growing concern about Australia’s laggardly response to climate change finally addressed, with teal independents garnering seats in Liberal heartland and record votes for Greens candidates. But what caused this seismic shift in Australia’s political landscape? And why now? We believe the rapid growth and diversification of Australia’s environmental movement since 2015 played an important role. – Robyn Gulliver

The Power of Young Voters

Young Australian voters helped swing the election – and could do it again next time, Intifar Chowdhury, The Conversation, 6.6.2022

The election shows how the centre of gravity of Australian politics has shifted. The various swings away from the major parties revealed just how discerning voters can be. It also showed voters are likely to act based on policy concerns, rather than political allegiances. – Intifar Chowdhury

The 2022 election also sends a crucial political signal to the younger voters. The results show them the power of their actions to affect change in Australia’s democracy – and that the vote, in an aggregate sense, is an effective tool to do so. The 2022 federal election was one to restore young people’s hope and faith in the Australian democratic system. Major parties need to acknowledge that younger voters do not like what they are offering, especially in response to climate change. – Intifar Chowdhury

Much of central Melbourne has been purged of Liberal men, replaced significantly by members of the fastest-growing single demographic in Australia, which for some reason unknown to modern political science also was the group most consistently ignored and talked-down to by Scott Morrison: professional women. – Annabel Crabb

Australia has more women in cabinet than ever before: what difference will diversity make?, Louise Chappell and Claire Annesley, The Conversation, 2.6.2022

The broader ministry boasts many firsts, including Penny Wong as Australia’s first foreign minister with an Asian background, Linda Burney, the first female Indigenous cabinet minister, and Anne Aly, the first female minister with a Muslim background…While falling short of 50/50 representations, this is a cabinet that better represents the country it serves. It is widely welcomed and long overdue. – Chappell and Annesley

If the 2022 federal election has taught us anything, it is that Australians had run out of patience with the status quo, and the electorate is now demanding politicians look like the country they serve – whether in traditional parties or as independents. – Chappell and Annesley

Firstly, a lot of these independents were elected on slim margins. Maybe this was luck, or good targetting, but it demonstrates how single-member electorate races can produce significant number of seat gains with a small swing. – Ben Raue

So while this has election has been focused on the inner suburbs, Labor’s prospects for growth lay elsewhere: mostly in the middle and outer suburbs, but it also includes some regional seats…There certainly are plausible gains for the Coalition if they decide to eschew the inner cities, but they won’t be that easy, and Labor will have the advantage of not having to defend a slew of inner city seats. The alternative path to victory for the Coalition isn’t as easy as some Liberal members make it out to be. – Ben Raue

What does this mean for the future? Well, I think this has implications for the Coalition’s paths back to power. They don’t have much room to grow in rural Australia, and any path back to power will have to involve winning more support in urban seats, if not the “teal” inner city seats where they were beaten so badly this year. – Ben Raue

Prior to the election I wrote about the long-term downward trend in support for the major parties, and how polling suggested that this trend would continue in 2022. Not only has it continued, but it has accelerated. – Ben Raue

The big change in 2022 is the increase in independent and Greens seats in this chart, with nine come-from-behind wins for crossbenchers. The increase in non-major party support has seen a big change in how election results analysis works, due to the increasing number of seats where the final count is not between Labor and the Coalition (what the AEC calls a “nonclassic” seat). – Ben Raue

The combined major party vote is highest in outer metro areas, and lowest in rural areas. But this gap has shrunk in 2019, with the swing against the major parties smallest in rural areas and largest in the outer suburbs. – Ben Raue

But it still gets down to education and the way ever-rising levels of educational attainment – particularly among women – are remodelling the party-political landscape. Take climate change. The better educated you are, the more likely you are to accept the science, believe we should be acting, and not be worried about either losing your job in the mine or paying a bit more for power. – Ross Gittins