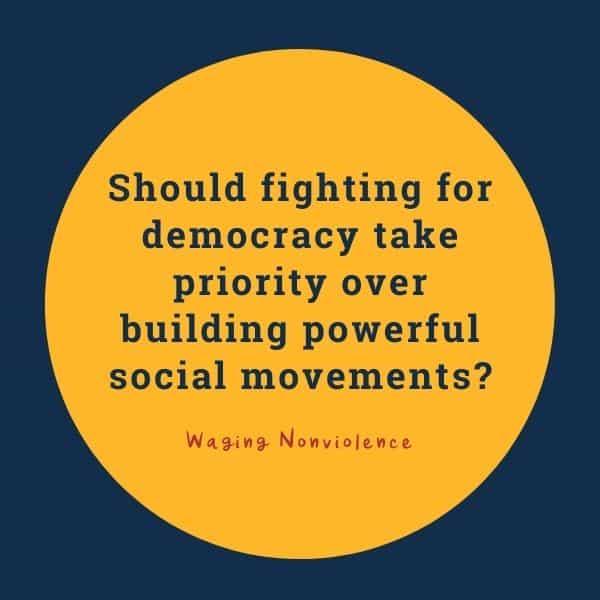 Activists throughout history have put social movement work on hold for the electoral arena. Determining whether to do so is a matter of strategy and calling. This article was originally published on Waging Nonviolence.

Because of my 2020 role in the Choose Democracy effort — aimed at saving the U.S. Constitutional procedure of presidential succession — I’ve been getting a stream of letters asking for advice on whether to plunge into the continuing fight for the integrity of the elections.

I’m known as someone who has consistently worked to build progressive social movements rather than follow their impact into the legislative and elective arena. Yet I made an exception in 2020 when I saw the threat of an attempted Trumpist coup. People ask me: Since Trump’s attack hasn’t stopped, shouldn’t movement-building work for equality, climate justice and peace give way to the priority of “saving the Republic?”

I see the strength of that argument, but Trump isn’t the immediate threat he was while president. Still, his lies have had a tremendous impact on the future of free and fair elections — from emboldening Republican gerrymandering efforts to passing voting restrictions in dozens of states over the last year. While I applaud the work people are doing to protect and expand our voting rights, there are other issues that need attention because their neglect also jeopardizes our future. Consequently, we all must discern where our individual time and energy is best spent.

To begin to figure that out, let’s take a step back and consider the bigger, historical picture (while exhaling).

There are two main things that are calling to folks like us:

It gets clearest during periods of political polarization, like the 1930s and the 1960s-’70s. On both the left and right, many more people were activated, violence increased, society seemed to be breaking down with conflict everywhere you looked. The political center decreased in size and internal cohesion while the right and left grew. The mass media mainly focused on the violence and the condition of the political center (since it’s much easier to report on the activities of the political parties), but when the period concluded it turned out that the major changes that lasted resulted from the struggle between the movements of the left and the right.

In both the 1930s and 1960s-’70s the outcome was change in a progressive (left) direction — substantially, and on many fronts.

In both the 1930s and the 1960s-’70s many thoughtful, creative and energetic people chose different roles to play, with some working on what was going on in the political party/legislative/electoral arena while others worked in the social movement arena.

At times of perceived emergency or crisis there was sometimes cross-over, when people put off what they were doing to assist the arena that was in trouble or had a particularly attractive opportunity.  In 1932 many movement people jumped in to help Franklin D. Roosevelt become president; in 1967 many electorally-inclined people jumped into national peace movement action, precipitating what authors Mark and Paul Engler call a “whirlwind” moment.

Choose Democracy was the 2020 invention of some movement activists like me who saw that the integrity of the electoral apparatus needed a helping hand; most of the leadership in that arena didn’t seem to recognize the danger. So we poked them by beginning to create the movement infrastructure that they would need to wage a defense of the Constitution, should it be needed — if, for example, the Jan. 6 Trump-provoked action were to succeed in delaying the installation of Biden.

Shifting between electoral and movement focus

Once the electoral arena leadership got a real picture of the threat to the state, and the danger faded, we in Choose Democracy could go back to what we felt called to do. For me, personally, that preference has always been to go toward the struggles the media neglect to cover — struggles I believe account for the major progressive change in this country’s history: the abolitionists, the women’s suffrage movement, the labor movement, the civil rights movement, the 1970s environmentalists that stopped building dangerous nuclear energy and the climate justice movement.

Even in this polarized period we’re living in, I see particular ways of using social movement strategies. That’s because social tension brings more people to us. We can grow more quickly if we know how.

So, yes, although I’m a social movement guy, I moved over to the “defense of the constitutional state” arena — but only when it looked like too many people there needed a poke. A year later, I’m now back to following my strong calling toward the climate crisis.

Maybe you have a strong overall inclination as I do, feeling called to work in the electoral/political party/constitutional state arena or, alternatively, in the social movement arena. Or maybe you’re fairly open to either. If it’s the latter and you need help deciding, consider your skills and talents. Think about where can you make the strongest contribution. Your geographical area and location in the social structure (race, ethnic group, class, generation, etc.) matters too. Certain work may be less present in your location and your efforts to strengthen it could have a greater impact. For example, perhaps Democrats in your geographical area haven’t awakened to the immediacy of the threat to the integrity of the electoral process, and need someone to “play Paul Revere” to get them moving to block a Republican anti-democratic initiative.

As a generalization, I find that people do their best work when it’s what “suits them” in some regard — where their skills and talents are needed, where spirit calls them, where they are most aligned with their analysis of what most needs changing, or where they have the most to learn and it’s learning that wakes them up excited in the morning.

Polarization brings anxiety to everyone, and anxiety is hard on us. Even though I know from study that polarization increases the opportunity for the major changes that I want to see, I still feel the anxiety — it’s the ocean I swim in. All the more reason we pay attention to which kind of work brings us some joy or at least satisfaction, even when the goals aren’t achieved as quickly as we’d like.

Ideally our choice will see us working alongside people who can be team-mates and evolve some team spirit.  We need and deserve collective support.

If your choice in other ways leads you to work in an arena where you do not find supportive people, there’s a fall-back. Continue to work in that arena with those people and form your own support team “back home” — from among your friends, your religious congregation, your old school-mates, your relatives — asking three to six of them to be your “home team,” one that will root for you as you do this hard work. Ask one of them be the convener, facilitating the group via Zoom if necessary to listen to you — not to advise you. Their job is to be a sounding board. They are the cheerleaders for the home football team, to cheer you on and ask for your sad and crazy stories as well as to listen to your good days.

Either way, finding support within your volunteer work or “at home,” you can safely plunge into making a difference as the U.S. travels into 2022 and beyond.

George Lakey has been active in direct action campaigns for over six decades. Recently retired from Swarthmore College, he was first arrested in the civil rights movement and most recently in the climate justice movement. He has facilitated 1,500 workshops on five continents and led activist projects on local, national and international levels. His 10 books and many articles reflect his social research into change on community and societal levels. His newest books are “Viking Economics: How the Scandinavians got it right and how we can, too” (2016) and “How We Win: A Guide to Nonviolent Direct Action Campaigning” (2018.)