Sharon France, graphic designer, shares how she created the designs for ‘parasols for protests’ for the People’s Climate March in Brisbane in 2015. She has also kindly shared her designs in a template for anyone to use.

I do most of my best work while I am asleep, or so it seems. Newly awoken and on a path to activism, early one morning in November 2015 I had an inspiration that turned into a small fun factory, in the lead-up to the People’s Climate March. 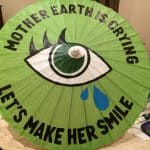 You see, living in Brisbane, with a very Anglo-Scottish hair and skin colouring, the idea of marching in the heat of a Queensland summer was not at all appealing, but obviously necessary. I needed a sign and I needed sun protection—and the lightbulb moment happened just as I woke on that fateful day—that I could combine the two! 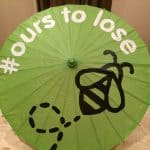 A bit of quick searching on the internet uncovered the base materials I would need: paper parasols at a very reasonable price, but sadly located several suburbs away and so a bit of a trek. They came in a variety of colours, and as a test batch I ordered two each of three colours: ‘Climate March’ Orange; ‘Australian Conservation Foundation’ Green; and good old versatile white: and had them mailed to me. 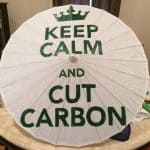 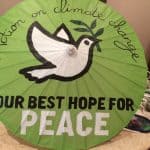 My first parasol was based on the logo for the Climate March. I had access to the logo as a stand-alone image file, so all I had to do was create a design, based on a circle outline and position the logo in the middle. 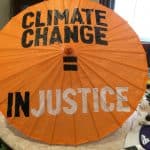 The next bit was not quite a McGyver manoeuvre, but it was a little inventive. I set up my dining room table with my laptop and a projector, and projected the image towards the doorway, where I had assembled a stage for the parasol. I passed the handle of the parasol through the rungs of the ladder and secured it into place with a series of rubber bands—I just needed it not to move too much. 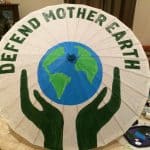 I projected the design onto the parasol canvas so I could stencil around the edges. With a little fiddling and adjusting, I was off… I used a very soft pencil (4B) and erased where I needed to. I turned the projector on and off a few times to make sure that the outline was indeed complete, and when it was, it was just a matter of painting inside the lines!

I showed the first couple of designs to Karl Goodsell (then of ACF Brisbane) and he asked if I could do some more designs. That then saw the start of around 34 pieces of work, a total of around 60 hours—from concepts, stenciling and then painting.

Here is a list of useful resources to help you ‘make your own’.

The PDFs of Sharon’s article and the templates are available to download below.