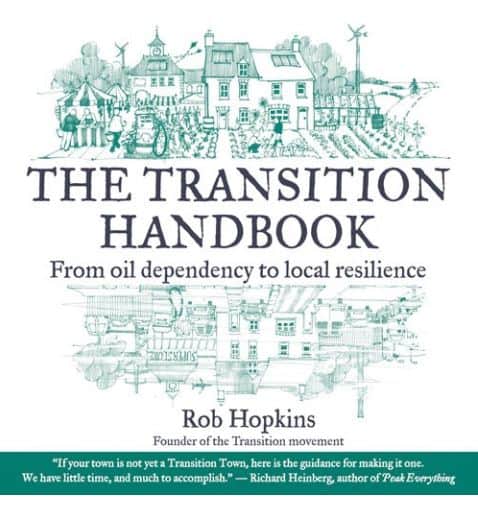 Holly Hammond reviews The Transition Handbook by Rob Hopkins – with emphasis on its insights around the emotional and psychological impact of climate change and peak oil.

What would working to change the world be like if it made more room for the ‘heart’? How do we communicate challenging information to people in ways that don’t push them in to despair? How do we nurture ourselves so we can support others? Asking these questions is a good start!

The Transition Handbook sets out the rationale and model for transition from fossil fuel dependency to local sustainable communities, in three parts: the head; the heart; and the hands.

I really appreciated this structure, and it made me think about the tendency of most activists to zone in on either the ‘head’ or the ‘hands’ and skip over and downplay the importance of the ‘heart’. In terms of peak oil and climate change, many people become incredibly absorbed in learning and communicating the details, the science, and the specific policy options. Others throw themselves into taking action, like personal energy use changes, lobbying, or direct action. A focus on emotions tends to be dismissed as a distraction from the real work required.

Hopkins talks about the ‘end of suburbia moment’ when individuals become aware of the reality of peak oil and climate change. He outlines a number of symptoms of ‘post-petroleum stress disorder’ (page 78) including:

Some tips are shared for coping with your ‘end of suburbia’ moment (page 81):

Hopkins argues convincingly for the importance of a positive vision in enthusing people to engage in transition initiatives (page 93). In fact, from what I have read and heard from people, it would seem that a positive vision is a key reason why the Transitions Towns model has been enthusiastically adopted in some communities, and spread virally to others.

To demonstrate why visions work, Hopkins uses the analogy of inviting a friend on holiday:

“If you can passionately and poetically paint a mental picture of the beach, the sunset and the candle-lit taverna by the sea, they will be more likely to come. Environmentalists have often been guilty of presenting people with a mental image of the world’s least desirable holiday destination… and expecting them to get excited about the prospect of not going there. The logic and psychology are all wrong.”

Utilising the approach of a persuasive positive vision, the Transition Handbook includes a detailed description of an ideal future, and the steps taken to arrive there. There’s also mock newspaper articles from the future – one of which was used by a Transition Town in the UK as an effective protest against a potentially damaging development.

What does this mean for activists?

One of things I got from reading the Heart chapters of the handbook, but which wasn’t directly stated, is that emotional awareness and interpersonal skills are valuable competencies for activists. Communicating to people about complex and challenging (even threatening) present and future realities, in ways that catalyse them in to action, is difficult. Being able to support people through a process of psychological readjustment really requires us to have done our own internal work. Otherwise we risk communicating our own fear, denial, desperation, cynicism (etc) in ways that have potential to undermine the good impacts we’re trying to achieve.

How do we communicate the hard news to people in ways that mean they really ‘get’ the reality, whilst also conveying the difference that action can make in creating a positive future? How do we shake people out of complacency and ‘business as usual’ without tipping them in to denial or nihilism, and leaving them there? Here I see another skillset that can make a big difference: participatory and empowered education. Hopkins argues for the importance of people developing their own arguments for transition, drawing on the addiction field for an understanding of how people change. Similarly, participatory processes for visioning build community connection, inspiration, and a sense of what is possible collectively.

Many activist groups deny or sideline the emotional impacts of the hard work people are engaged in. Sometimes I get the sense that people willingly bombard themselves and each other with scary information – maybe as an attempt to try and shake each other out of numbness into urgency. I think it would be healthier to recognise that feelings are normal and natural, and need to be taken into consideration.

Depending on the group, this may mean:

Some questions for reflection