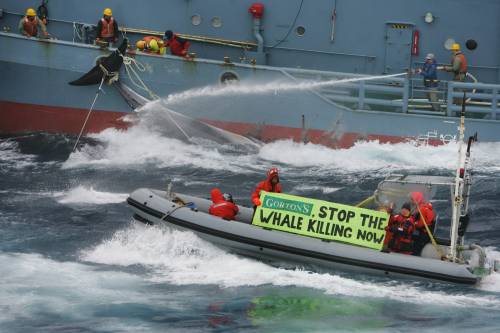 Greenpeace activists try to hinder the transfer of whales from a catcher ship to the Nisshin Maru whaling factory ship. Southern Ocean, 11.01.2006. Image by Takver

In 1985, the International Whaling Commission instituted a moratorium on commercial whaling, but in 1986, the Japanese government started a scientific whaling program to study whales. Many observers view the scientific whaling scheme as a way to continue commercial whaling because the whale meat is often sold after the whales are caught for study.

The Japan-based parent company of Nissui Company owned the fleet used by the government to study whales. The company received government subsidies for the use of their ships and canned the whale meat in their cannery for sale in the Japanese market.

Environmental groups such as the Sea Shepherd Conservation Society, Greenpeace, and the Earth Island Institute have targeted Nissui, one of the companies with the largest stake in whale hunting, through its subsidiary companies, Sealord Tuna in Australia and New Zealand and Gorton’s Seafood in the United States.

Actions against Sealord Tuna started in January 2005 when Sealord inquired with Earth Island, a dolphin-safe tuna certifying organization, about being certified dolphin-safe. Earth Island declined, saying that Sealord could not be certified when they were owned by Nissui, a company that hunts whales. Through more investigation, Earth Island decided to launch a boycott of Sealord in Australia and New Zealand in November 2005.

In November 2005 the Environmental Investigation Agency released a report that tied Gorton’s Seafood to its parent company Nissui and by extension, the whale meat industry. Soon after, Greenpeace and the Humane Society of the United States called on Gorton’s to use its connections to Nissui to end the company’s involvement in whale hunting. The organizations began a consumer boycott of Gorton’s Seafood products. 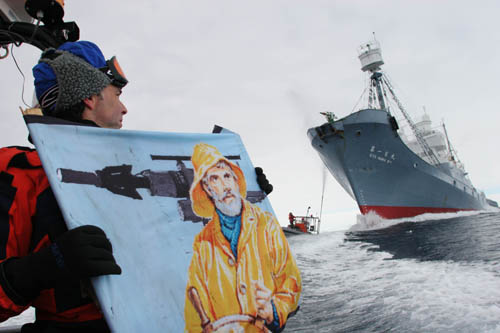 Through Ocean Defenders Alliance, concerned people across the world sent 100,000 emails to Nissui and related companies asking them to get out of the whale hunting business.

In the winter of 2005 to early 2006, Greenpeace and Sea Shepherds sent ships to the Southern Ocean Whale Sanctuary to interrupt the whale hunts by the Nissui Company. Activists used inflatable zodiac boats to put themselves between the hunting harpoons and the whales. They were successful in making it much more expensive and difficult for the whale hunters to meet their hunting quotas of the number of whales they were allowed to take.

During that winter, the New Zealand Maritime Union “black banned” working with Japanese whaling ships. Trevor Hanson, New Zealand Maritime Union General Secretary, said the union supported Greenpeace and Sea Shepherds in their attempts to end Japanese whaling because the union saw whaling as part of a larger maritime crisis of overfishing and exploitation of maritime workers. Hanson said that “in many cases the exploitation of the maritime environment goes hand in hand with the mistreatment of maritime workers.”

31 March 2006 Nissui announced that it would divest its whaling company assets and no longer participate in Japan’s scientific whaling scheme. The company transferred its shares to several public interest corporations. The company also stated that it would stop its canning and sale of whale meat.

Despite Nissui selling its assets in the whaling industry, the Japanese Fisheries Agency claimed that whaling would continue under government sponsorship, but all organizations involved in the campaign agreed that the boycott and other actions showed that consumer action can profoundly influence the global market for endangered species.