Imagine doubling the major gift revenue of your organisation in just five years. Micah Demmert did just that at Oxfam. Learn best practice approaches to fundraising and proven tips to build lifelong relationships with funders.

At Progress 2019, Micah Demmert, Head of Philanthropy at Oxfam Australia, gave a presentation on how Oxfam had more than doubled their major donor fundraising income over the course of five years. Their secret? Some simple best-practice strategies that could work for you too.

Below, I summarise each point in turn, then offer some broader reflections. Micah was also kind enough to share his whole presentation, which is also linked at the bottom.

Universities are incredibly effective fundraisers. However, these huge sums of philanthropic revenue make up a minuscule fraction their total revenue: for charities with revenue over $100m (like universities and hospitals), donations make up only 4% of their total income (at least for the Group of 8 universities). This money matters to a university, but it could be doing a whole lot more somewhere else. So what are universities doing that makes them such effective fundraisers? Is there some sort of secret? Or could we learn from their lessons and also aim to raise such sums?

Here’s how they do it

Micah then drew upon research into the motivations of these philanthropists who are donating to universities. Apparently, there are five key reasons that these people give to universities:

If you want to remember these five things, I suggest the mnemonic KACHING: 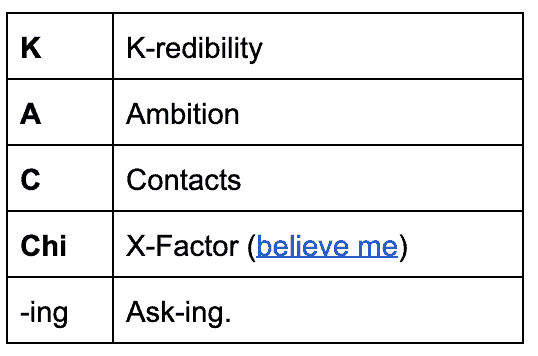 “K-A-C-CHI-ING” gives you five things to help you expand major donor fundraising. Very helpfully, Micah described how Oxfam Australia applied these principles. In the process, they increased major donor giving from $2m to $5m in the five years from 2014 to 2018. So what did they do? Here’s how Oxfam did it

In 2015, Micah’s team introduced “Thematic Proposals”. Instead of asking donors to fund one of a hundred different projects, Oxfam could now group projects under eight different themes. Instead of having many projects with smaller budgets, Oxfam could now pitch a theme to a major donor as something warranting a large donation. In addition, while the income would still be affiliated with the theme, it gave Oxfam greater flexibility around how the money was used to support their work.

These “Thematic Proposals” apply the principles of credibility and ambition. They demonstrate credibility by showing that Oxfam has the capacity to administer a large donation effectively. They respond to ambition by creating themes that can align with a donor’s interest and give the donor a chance to do something big on an issue they care about.

The Oxfam Circle and Site Visits

Oxfam has also begun to offer the “X-Factor” by formalising a system for major donors to be recognised and to be given ‘an experience money can’t buy’. The “Oxfam Circle” is basically a donor club, in which some donors get privileges such as invitations to events or time with the CEO. Also, in 2016 Oxfam began running site visits. At their own expense, donors have the chance to see Oxfam’s work on the ground, chat with staff, and feel like they are part of it: to see with their own eyes what their money is enabling. Both these initiatives assist with making donors feel like part of the Oxfam community, building and strengthening connections.

In case it’s not clear, this is how Oxfam implemented more “asking”! Micah emphasised the importance of sitting down with donors in person and learning about them and their motivations. “People give to people,” he said. “They don’t give to projects.” Basically, fundraisers need to act more like organisers and go have relational meetings.

So that’s how Oxfam did it! Yes, they had resources that maybe you don’t have. However, all these increases came about through changes in their practices, not through increasing their fundraising budget. They just learnt to use their resources better. In the same way, you can tap into these principles and apply them in your situation.

However, if you’re like me, you may have some questions: will this affect your independence? Will your organisation be able to appeal to donors like an apolitical university can? I raised these questions with Micah and some thoughts are below.

For many organisations, fundraising many small donations from a lot of different people isn’t just a tool: it’s part of who they are. It can be a symbol of who you exist to serve, and it can create accountability to the dues-paying membership (such as in a labour union). If these organisation began to court major donors, would they lose their independence?

Well, it’s not a case of either/or, but one of both/and. You don’t need to do major donor fundraising instead of other fundraising. Rather, they are complementary. Your major donors are unlikely to be well-known philanthropists who grace the BRW rich list. Instead, they are your existing supporters with some extra discretionary income who are maybe already making regular donations. You can raise more money from these people while actually deepening your engagement with your own supporters. You just need to start meeting with them.

However, this is changing – and you can be part of making this change. There is a growing appetite in philanthropy to invest in advocacy as a way of making large-scale, lasting change. The marriage equality campaign is an example of this, as an advocacy campaign that still managed to attract significant philanthropic support as well as crowd-sourced donations. A refusal to belief that philanthropists will support advocacy is a self-fulfilling prophecy. Ultimately, it’s up to us to make the case for how donors can make an impact by supporting our work. You may not win over every donor, but just a handful of major donations could still make a big difference.

As someone who appreciates a couple of citations and a clear thesis, I was grateful to Micah for offering his workshop at Progress 2019. Micah made a strong case for why we should be more ambitious with our fundraising, explained the principles to adopt, and demonstrated how those principles could be applied. While our work is certainly cut out for us as charities, we’ll only be making our lives easier if we make the most of any and every opportunity to secure the resources we need to do our essential work.

To see slides of Micah’s presentation Rethinking Major Donors: The way you think about philanthropy is wrong download PDF below.