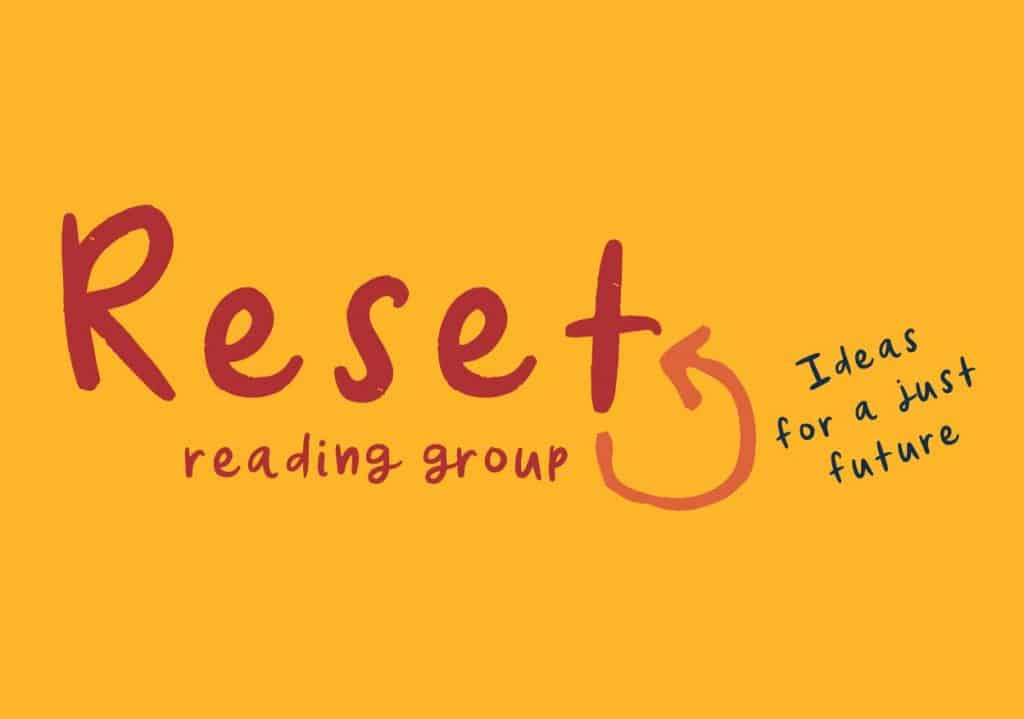 Welcome to the Reset Reading Group

To access Reset Reading Group readings on each theme view the Reset collection.

Ideas for a Just Future

The Coronavirus pandemic has disrupted business as usual in ways that are still unfolding and we are still coming to understand. This disruption opens up different possible futures: in one direction deepening inequality, injustice and climate impacts, in the other the chance to recover from this crisis and build worlds based on social and ecological justice.

Everything is being Reset… How things unfold from here is up to us. This reading group is a chance to take the time to develop shared ideas and visions for a just future, together.

The program of readings, films and podcasts will draw on philosophers, political theorists, educators, agitators and artists as well as the collective wisdom of participants. The focus of the discussion will be how we can build a better world, and what that better world will look like. We’ll move from an analysis of the crises to shared vision, language and tools for transformation.

It’s a crucial time so be part of the conversation!

How You Can Participate

Reset Reading Group will run for three months with a new catalyst for discussion provided every fortnight. The readings will be collected on the Commons Social Change Library and emailed out to everyone who registers.

You can participate in a range of ways:

We’ll support you to connect with others and get the most out of discussions.

Please note that the 13 centrally organised discussion groups are now all full. Sorry if you missed out! Many more self-organised groups have formed are in the process of forming. If you are looking for an existing group that may have space join the Reset Reading Group on Facebook and comment in the ‘Group Queries’ thread. See the Frequently Asked Questions if you have other queries about participation.

For more information about the hosts and curators see About the Reset Team below.

To access readings on each theme view the Reset collection.

About the Reset Team

The Reset Reading Group was initiated by Alex Kelly (artist and social impact producer) and developed in collaboration with Holly Hammond (Director of the Commons Social Change Library). Each fortnight’s food for thought will be curated by these cutting edge progressive thinkers:

Karrina Nolan is a descendant of the Yorta Yorta people in Victoria. Karrina is the Executive Director of Original Power. She’s worked as an organiser, strategist, campaigner, facilitator, lobbyist and hip hop wrangler alongside Aboriginal and Torres Strait Islander women, young people and communities for over 25 years. She’s led programs and campaigns on women’s rights, globalisation and environmental justice with a focus on First Nations peoples. She has most recently been working with communities fighting for land justice and for the protection of country. Karrina has been building the power of her mob working with Aboriginal and Torres Strait Islander communities building up capacity for self-determination in the context of mining, economic development and climate change. Her work has focussed on supporting communities’ capacity to organise, act decisively, share knowledge and make informed decisions that take into account long-term community needs as well as country and culture. See Reset 1: First Nations Resistance & Climate Justice.

Alex Kelly is a settler Australian filmmaker and artist committed to social and climate justice. Alex has worked in organising, film, theatre, communications strategy and troublemaking in many forms. This includes taking part in blockades from Jabiluka, Kakadu to la zad, France and working on creative projects such as Ngapartji Ngapartji and Something Somewhere Film Festival as well as the documentary films; Queen of the Desert, THE ISLAND, Island of the Hungry Ghosts and In My Blood It Runs. Alex was the Global Impact and Distribution Producer on Avi Lewis and Naomi Klein’s This Changes Everything project. In 2013 Alex was awarded a Churchill Fellowship and explored models for social change documentary impact and engagement in the UK, Canada and USA. Alex was also a 2016 Sidney Myer Creative Fellow. Alex is currently developing The Things We Did Next – a multiplatform speculative futures and climate change project. For project details see echotango. See Reset 2: Disaster Capitalism & A People’s Response.

Tim Hollo is Executive Director of the Green Institute, where he leads thinking around ecological political philosophy and practice, and drives policy discussion around Rights of Nature, Universal Basic Income and participatory democracy. He is currently a visiting fellow at the Australian National University’s School of Regulation and Global Governance (RegNet). He is the founder of Green Music Australia, through which he combined his environmental activism and experience as a musician with FourPlay String Quartet. Tim was previously Communications Director for Greens Leader Christine Milne, has been both a board member and campaigner at Greenpeace Australia Pacific, and has worked for 350, Lock the Gate and others. His writing on environmental, social and political issues has been widely published, including at the Griffith Review, the Guardian, ABC, Huffington Post, and Crikey, as well as Green Institute monographs, discussion papers and blogs.

Amanda Tattersall is a community organizer and academic. She is the host of the ChangeMakers Podcast that features social change stories from around the world. She was the founder and former Executive Director of the Sydney Alliance, bringing Saul Alinsky style community organising to Australia and building a diverse coalition of community organisations, unions, religious organisations and schools. She also co-founded GetUp and was the Deputy Assistant Secretary of Unions NSW.She wrote the globally focused “go to” book on coalition strategy (Power in Coalition, Cornell University Press), and has been involved in many social movements including the student, union, peace, and refugee movements. She has a Post-Doctoral Fellowship at the University of Sydney in city-based citizen activism and is based at the Sydney Policy Lab.

Roj Amedi is a writer, strategist and human rights advocate passionate about design, contemporary art, and access to justice. Since migrating to Australia as an Iraqi-Kurdish refugee, Roj has campaigned for refugee, migrant, and LGBTIQ+ rights with organisations such as GetUp!, Colour Code and Justice Connect. Previously, she has been an editor at Acclaim Magazine and Neue Luxury, written for the likes of Saturday Paper, SBS, Meanjin and Vault Magazine, and is the acting Chair of the Human Rights Arts and Film Festival. Her life’s work is economic and racial justice.

If you have other queries related to the Reset Reading Group see the Frequently Asked Questions. If that doesn’t fill in the gaps, or you would like promotional materials or media comment, contact Holly Hammond.