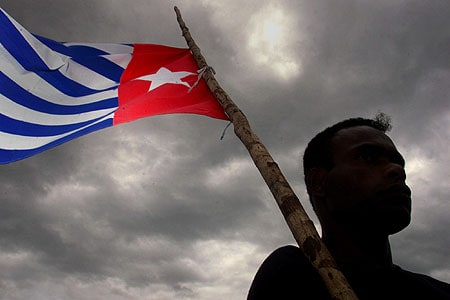 It always takes an element of courage to sing protest songs, but few musicians have ever faced the same consequences as Arnold Ap. The West Papuan folk singer and anthropologist was killed in 1983 by the Indonesian army. His crime was preserving a culture and language the Suharto Indonesian government did not want preserved. The music Arnold collected, and the songs he wrote with his band Mambesak, was seen as a direct threat to those in power.

Arnold Ap is not alone as a martyr to the cause of West Papuan freedom – in the half century since Indonesia invaded and took control of the former Dutch colony, hundreds of thousands of Papuans have been killed by the army, police or armed militia. Even today, every few months there are new reports of Papuans killed at protests or by vigilantes. But neither is he alone in using music as a part of the struggle.

Contemporaries of Mambesak in Papua were pop band the Black Brothers. Possibly wary of facing the same fate, they left Papua in 1979 – first for Vanuatu, then neighbouring Papua New Guinea, the Netherlands and eventually Australia. Becoming probably the most popular band of their time in the Pacific Islands, the band never lost their radical stance, as songs like the patriotic Laskar Papua shows; or their pride in Papuan culture, as seen on this amazing clip from Dutch television.

Other Papuan pop bands have recorded patriotic songs that challenged the Indonesian control of a country that for decades they referred to as Irian Jaya – Trio Ambisi’s Tanah Papua being another example, or Edo Konodologit’s Aku Papua.

In the late 80’s, an art-rock band from Melbourne called Not Drowning, Waving arrived in Papua New Guinea. They were interested initially in the music of the country, but while there they encountered West Papuan refugees fleeing violence and living in the Blackwater refugee camp near the border. They wrote the song Blackwater in response. That was the beginning of the involvement of Not Drowning, Waving and particularly their pianist/vocalist David Bridie with the protest music of West Papua.

Bridie would later record the soundtrack for the film Strange Birds In Paradise about the plight of the West Papuan people, and would start the record label Wantok Musik to release Melanesian music. Among the releases was an album of Papuan stringband music, sung in dialect by Black Paradise. The album’s name is a tribute to Black Paradise’s predecessors in soundtracking the struggle of the Papuan people – Spirit Of Mambesak.

Also on Wantok Musik is Papua New Guinean musical legend George Telek. The border between the two halves of the island was drawn long ago by colonial powers. George Telek for one rejects the demarcation – on this joyous song (recorded with fellow PNG singer Ngaiire), he sings “ol wantok bilong you me” (“we are all the one tribe”).

One of the most prominent advocates for West Papuan independence in recent years has been UK-based Papuan refugee Benny Wenda. Benny has lived a life most of us see only in our nightmares, but like most Papuans he loves to sing. He plays the ukelele, and he and his wife regularly perform freedom songs as the Lani Singers.

Within Papua, music plays a big role in maintaining the spirits of people in the struggle. Papuan people who have grown up with horrific violence and repression are rarely in need of consciousness raising. But outside of Papua music is vital for bringing attention to a struggle that is often scarce due to the apathy/complicity of other nations and the media blackout long imposed by the Indonesian government. Sometimes from Papuans abroad like those I have mentioned already, sometimes from projects like the Rize Of The Morning Star albums, a couple of compilations bringing together artists from the Pacific and around the world put together by another PNG musician Airi Ingram aka Airileke. Airi also made this song and stunning film clip about the unity of the island of Papua.

The last few years we have seen music used in a different way to help the struggle; with a series of events across Australia like Punks For Papua and Rockin For West Papua. Izzy Brown of political hip hop group Combat Wombat has also organised events like the land and sea Freedom Flotilla which in 2013 included concerts across Australia retracing the ancient links of of Australian Aboriginals with their Melanesian brothers and sisters in Papua.

Of course the struggle towards merdeka continues, and it is indeed a long and hard road. But music plays its part in the journey, in a way that surely honours and cheers the spirit of Arnold Ap. Arnold’s last song Mystery Of Life sings

“Life is a mystery, we can not picture what to expect.
That is the reality.
I am imprisoned in my world.
The only thing I desire and am waiting for is nothing else but freedom”