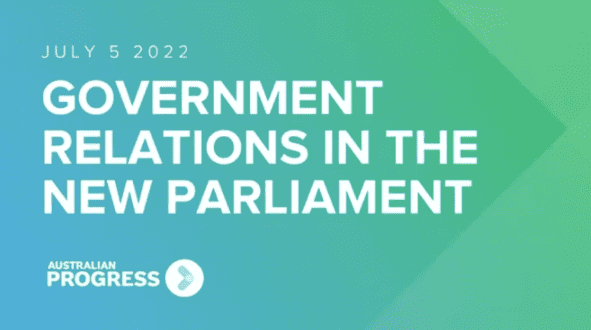 Two webinars held in June and July 2022 by Australian Progress about political reform and government relations in relation to the newly elected Labor Government who won power in the Australian Federal Election 2022.

Winning Reform in the New Political Context from AustralianProgress on Vimeo.

Designed for campaigners and advocates, learn who’s who in the new Parliament, what to expect from the Labor government and the crossbench, and tips for how you can best position your campaigns to win. A webinar from Australia’s leading government relations experts on how to win change under a Labor government.

Government Relations in the New Parliament from AustralianProgress on Vimeo.

How does Parliament work in this new context? What do we need to know about the decision-makers under Labor? How do factions work? And how can we best engage the public sector in our campaigns? Join policy and government relations experts Daney Faddoul and Lauren Frost from the Human Rights Law Centre, and Maria Poulos from the Australian Conservation Foundation as we take an inside look at how policy reforms are made under Labor as well as insights on how to best position our campaigns to win.