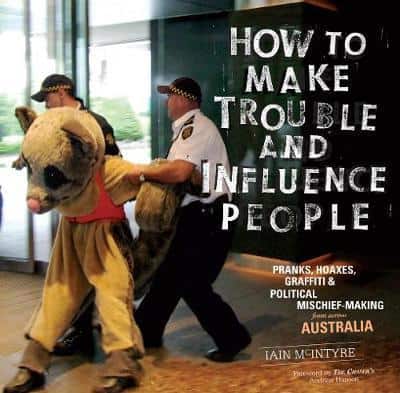 How to Make Trouble and Influence People – About and Book Reviews

How to Make Trouble and Influence People has appeared in two editions which compile and build on the original series of zines that came out in the 1990s. The first edition was published by Breakdown Press in 2009 and did not feature chronological listings. The second, published by PM Press in conjunction with Breakdown in 2013, adds introductions for different periods and arranges the stories chronologically.

The books (and the preceding zines) were written by Melbourne based historian Iain McIntyre. Activist artist Tom Civil designed the two editions and alongside McIntyre and editor Lou Smith helped to research photos, stories and other materials.

The book can be purchased from PM Press. The Commons Library includes two excerpts from the book – interviews with Kevin Buzzacott and a BUGA-UP activist. See also stories of radical history, photo gallery and a further reading list.

Here are two reviews of the book, the second including an interview with Iain McIntyre.

How Mischief-Makers Built Australia Through Pranks and Protests

In his new book How to Make Trouble and Influence People, Iain McIntyre offers readers an alternative version of Australian history.

Australians have long been troublemakers—witty, willing to mock and thwart authority, and full of the kind of no-nonsense pragmatism that comes from making a society in a harsh landscape. Iain McIntyre’s How to Make Trouble and Influence People: Pranks, Protests, Graffiti & Political Mischief-Making from Across Australia is a new edition of a book that began as a zine nearly 20 years ago. While the title, of course, parodies the most famous example of the self-help genre, How to Make Trouble is more Howard Zinn than Dale Carnegie. It offers an alternative history of Australia, chronicling how it “has progressed by a series of little rebellions” (according to an epigraph at the front of book from politician and writer Leslie Haylen).

Some of the events described here are sobering, especially the 18th- and 19th-century accounts of violent uprisings led by Aboriginal groups and rebellions staged by convicts—and even bloodier reprisals from authorities and settlers. But subversive wit has also been a powerful force throughout Australia’s history: In 1876, a group of Irish political prisoners escaped by posing as Americans, commandeering a boat, and unfurling an American flag. In 1911, Australia’s burgeoning labor unions plastered the sides of lampposts with slogans like “A bad day’s work for a bad day’s pay.” In 1986, a group of activists stole a $2 million Picasso painting from the National Gallery of Victoria and held it for ransom to demand an increase in arts funding, then quietly returned it weeks later. In 2009, the “Ministers of Energy, Resources and Silly Walks,” wearing suits and bowler hats, joined hundreds of protesters at a polluting coal power plant to urge that it be decommissioned.

A section at the end of How to Make Trouble interviews famous Australian gadflies and activist leaders. They offer wit and wisdom about the ways art, humor, persistence, and defiance can penetrate politics and history.

A sugar glider is being dragged outside by two cops. It has just dumped a pile of woodchips inside the Victorian Treasury Office and yelled, ‘Stop woodchipping the water catchment, Brumby!’

As you might have guessed, this is no ordinary marsupial. Rather, it’s an activist in costume, an activist with a sense of humour – an activist with the guts to cross the thin blue line, to challenge the police, fight for a cause and make the government look silly.

Iain McIntyre’s How to Make Trouble and Influence People (Breakdown Press, 2009) is about this person, plus the thousands more who have lit up the Australian landscape with a laugh and a rebel yell. It’s an exceptionally well designed book in which style and content are unified, inseparable, perhaps suggesting an underlying politics about the indivisibility of these elements. Images of protest, culture-jamming and graffiti leap from every page; a whirlwind of anecdotes picks you up in the middle of a convict rebellion, then drops you onto the bonnet of John Kerr’s car as the governor-general is attacked with smoke-bombs, rocks and eggs.

Iain has spent two decades making trouble as an activist, broadcaster and historian. Having published three smaller books and numerous anarchist zines, and having collected material for Melbourne community radio station 3CR’s popular Seeds of Dissent calendar, he has developed an eye for the treasures buried in the largely untouched soil of Australian Left archives.

How to Make Trouble, produced with designer Tom Sevil and editor/researcher Lou Smith, covers campaigns like Vietnam in detail, but it’s the stories from the margins that really stand out: the anti-development activists who, in 1969, protested against the demolition of a North Melbourne laundromat by hanging out their dirty underwear along Abbotsford Street or the female munitions workers in Perth who, in 1943, became fed up with being harassed by soldiers while walking home in the dark and occupied train tracks to demand safer public transport.

If it is hard to imagine campaigns like this today, well, that’s precisely the point. In his introduction, Iain proclaims an intention to record ‘how generations of Australian troublemakers have moved beyond political inertia to push the boundaries of “acceptable” protest’.

When I meet him to discuss his publication he explains that he’s trying to counter an all-too-common experience on the Left – the routine of worthiness in defeat:

By doing something your opponents don’t expect, you can shift the game and it’s harder to respond to. I remember reading that when Jeff Kennett came to power, the Liberals drew up a game plan which said, ‘We’ll do this, and this is what the union movement will do: they’ll have a series of general strikes, which won’t really be that hard-edged, and then, after six months, it will slowly wind down’, and that’s exactly what happened. So, every campaign needs the same basic things but if you don’t have some tactics and strategies that are unexpected then your chances of winning are a hell of a lot less.

Sometimes you still might have no chance at all. Iain’s favourite story is what he calls ‘the first Australian “work to rule” action’. After a reprimand for not doffing their hats to officers, a group of convicts remove their headgear while rolling a boulder up a hill – then watch their load roll down and break an overseer’s leg.

Not all of Iain’s material is as explicitly political. Fourteen feature interviews probe the histories and motivations not only of activists like Meredith Burgmann and BUGA-UP but also of media pranksters John Safran and The Chaser.

I was perhaps most surprised about the entry on Barry Humphries’ 1956 prank on Melbourne’s Ashburton train line in which accomplices served him a full breakfast in stages as the train pulled into each station. I tell Iain about reports of a man having his clothes brought to him in a similar way on a morning train from Hurstbridge in 2009. To him, these pranks are important to document and claim as part of a broad and ongoing radical tradition:

Some [direct action] is a last-ditch thing to get attention to the issue, some of it’s being a nuisance along the way, some of it’s publicity stunts, some of it’s as much aimed at other parts of the Left as at the wider public, and then some of it I just put more in the what-the-fuck, head-fuck category – and Barry Humphries’ stuff was like that … out of context or just strange. People don’t quite get it; it forces people to think.

The chronology of the book is almost non-existent, although Iain explains that some movements, such as the Queensland civil liberties campaigns, have been placed in episodic order (although dispersed throughout). This unconventional approach may confuse, but it also averts the experience of ploughing through a tome:

On a practical level, there would have been an inordinate amount of material from certain decades, and … rather than just having slabs of Melbourne and Sydney material … you’ve got the Communist guy in the 1950s graffitiing ‘The Great Red Dawn is breaking’ over the Perth Railway Station, and the next page you’ve got ‘Male chauvinists start shaking: today’s pigs, tomorrow’s bacon’!

Iain’s energy and passion are infectious. An ESL teacher with a young family, he is currently finishing his Masters thesis on the 1991 AIDEX protest – a topic he also covered in the book Always Look on the Bright Side of Life (Homebrew, 2008). For almost a decade he was involved in ‘The Sewer Show: Squatters and Unwaged Airwaves’ on 3CR. Now, there’s an anthology of American hobo writing and an oral history of the Melbourne squatting scene in the works as well.

Most of all, Iain is committed to creative activism as a practice that is not only politically effective, but which nourishes and sustains its proponents. It’s a view he puts forward with typical irreverence:

It’s not the most articulate way of putting it, but with activism you’re kind of putting your face in the shit of the world, so you’re drowning in all this shit. And the Left’s very big on critique, so you’re looking at all this horrible stuff all the time. By using fun and humour you’re making yourself feel better, and it gives you some energy to continue – but it also gives an alternative to saying politics has to be a grim, dour struggle.

How to Make Trouble and Influence People is available for sale from PM Press.