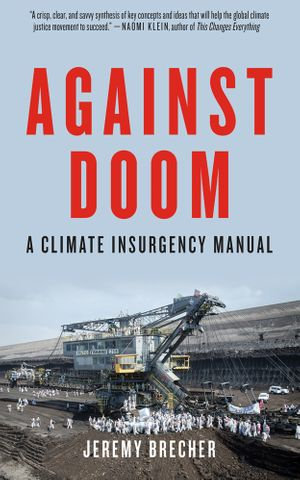 Jeremy Brecher is the author of more than a dozen books on labour and social movements and has written and/or produced more than twenty video documentaries. A long time activist he has had three books published by PM Press regarding climate justice – Against Doom: A Climate Insurgency Manual (2017), Common Preservation: In a Time of Mutual Destruction (2020), and Save the Humans? Common Preservation in Action (2020).

In the following extract from Against Doom, Brecher outlines the strategic components required to create a successful climate insurgency.

Climate insurgency is a strategy for using the power of the people to realize our common interest in protecting the climate. It uses mass, global, nonviolent action to challenge the legitimacy of the public officials in the U.S. and elsewhere who are perpetrating climate destruction.

To realize their objectives, the climate protection movement needs to weld the people of the world into an effective force capable of compelling corporations, governments, and institutions to shift from fossil fuels to clean energy. That requires creating understanding and determination in every community, geographical and virtual. It requires breaking down the invisible rules that currently discourage people from thinking and talking about the one thing that will most determine their future and that of their posterity. It means self-organization through which people move out of isolation and become part of a movement. It means creating ways for people to reach out and join with others. Conversely, it also means creating ways that those who are already organized can reach out and draw in those who are not. This underlying process of de-isolation and movement construction is the necessary condition for the ultimate success of the climate insurgency.

That process both depends on and contributes to a transformation of the public mind. People need a clear understanding that continuing to burn fossil fuels will destroy the climate system. They need to understand how fossil fuels can be rapidly replaced by renewable energy and energy efficiency. And they need to understand the power of the people to impose such a change. The strategy of the climate insurgency is designed to bring about that transformation of the public mind.

The climate insurgency will make two basic demands on every business, government, and institution. The first is to immediately halt all new fossil fuel infrastructure—a “fossil freeze.” The second is to create and immediately start to implement a Climate Action Plan that lays out a credible pathway for the elimination of fossil fuel use by 2050.

The climate insurgency will develop the power to impose these changes by:

These elements are mutually reinforcing, and they all need to happen all the time. Every climate insurgency action should be designed to strengthen one or several of these means.

They will be successful if they draw people out of isolation and despair into action; increase the number, unity, and power of participants in the movement; build understanding and support in the wider population; weaken the fossil fuel forces; undermine their pillars of support; give climate destroyers motivation to change; threaten loss of their legitimacy and authority if they don’t change; and lay the groundwork for further action.

Jeremy Brecher is the author of more than a dozen books on labor and social movements including Strike!, Brass Valley, History from Below, Building Bridges, Global Village or Global Pillage, and Globalization from Below. He was Humanities Scholar-in-Residence at Connecticut Public Television and Radio and received five regional Emmy Awards for his documentary film work. He helped found and currently works with the Labor Network for Sustainability. He holds a Ph.D. from the Union Graduate School. (Source About Author: PM Press)

Before the election of Donald Trump the world was already speeding toward climate catastrophe. Now President Trump has jammed his foot on the global warming accelerator. Is there any way for the rest of us to put on the brakes?

Climate insurgency is a strategy for using people power to realize our common interest in protecting the climate. It uses mass, global, nonviolent action to challenge the legitimacy of public and corporate officials who are perpetrating climate destruction.

A global climate insurgency has already begun. It has the potential to halt and roll back Trump’s fossil fuel agenda and the global thrust toward climate destruction.

Against Doom: A Climate Insurgency Manual tells how to put that strategy into action—and how it can succeed. It is a handbook for halting global warming and restoring our climate—a how-to for climate insurgents. (Source for Book Overview: PM Press)

Obtain a copy of the book Against Doom: A Climate Insurgency Manual from the publisher’s website.