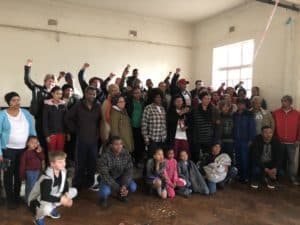 Fists in the air at the Reclaim the City meeting.

This article is a companion piece to ChangeMakers podcast Season 2 Episode 4: Reclaim the City.

On the western side of Cape Town’s downtown are a string of what looks like unused buildings. From the outside they appear like they must be empty. Broken windows, damaged roofs. If you were a tourist here you wouldn’t “see” them – just a haze as you enter the city on one of the major highways. But today my 9 year old son and I came to find one of those buildings because we were there for a meeting about housing in the city.

To be honest, at first, I thought we were in the wrong place. It was a space that I, a middle class white woman from Australia, would not normally be. I kept checking and rechecking google maps on my phone. In the vacant lot next to where google was telling me to go was a series of semi-permanent camps set up by people who were homeless.

The actual building we were looking for – which was meant to house a meeting of over 100 people – looked like a boarding house. I said to my son, I don’t know if this is right. In my head I was looking for a more ‘formal’ community hall. But up the stairs I could see someone in a red and white Reclaim the City t-shirt – so we went in.

The stairs leading up from the street were dripping wet. Noisily wet. Even though this building housed dozens of families, as was explained at the meeting, the building had a leaking roof that the Public Works Department had refused to fix. So even though it wasn’t raining outside – the residue from recent rain meant it was raining inside were people lived.

We found our way through to an open space that during the day was a makeshift laundry. There were ropes across the roof and a stranded sock still hanging on the side of the room. But this space was being claimed for another purpose today – it would house the first gathering of a City Central group of leaders for Reclaim the City’s housing campaign.

Reclaim the City are desegregating the inner city suburbs of Cape Town by fighting for housing for the poor. They do this by occupying sites to create emergency accommodation while also campaigning for the building of affordable housing. They have created occupations in Sea Point and Woodstock, and now are seeking to spread their campaign to the downtown area. This meeting was exploring how they might do that.

We were there early and while Hartley and I mucked around with some of the kids, an extraordinary number of chairs were stacked out. Over 120. And, by 2pm when the meeting was scheduled to start there were only about 40 of us there. The stage was filled with kids (including my kid) playing games. I was wondering if they had been too ambitious. But by 2:30 when the meeting kicked off the room was full.

This is a poor people’s movement by any other measure. Most of the people in the room had experienced eviction, many homelessness, and some had also experienced the forced removals under apartheid. It was a space where black and coloured people could give testimony and prepare each other for building a new wing to an escalating city-wide movement. Stories were shared – a woman explained how her family were evicted with her stuff dumped on the streets, where she had to live in her car with her 8 year old child and 2 month old baby before she found emergency accomodation through Reclaim the City (at its Woodstock occupation).

The meeting moved from testimony to strategy, where Nkosikhona Swartbooi, the Lead Organiser from Ndifuna Ukwaz – a supporter of Reclaim the City, stood up and gave a history of the land struggles in the city, a power analysis about how the banks, developers and government were continuing to cause the pain, an explanation that rallies hoping for promises don’t work and an invitation to consider strategies that create the change that they seek.

What then unfolded was a dialogue between leaders and organisers – where inventive suggestions were raised and analysed. One leader suggested “create title deeds and give them to the state rather than ask for deeds from them,” others identified other sites for occupations, ways to mend the houses being occupied, the formation of new advice assemblies where people could gather regularly or ways to support solidarity inside the diverse and sometimes fragmented communities they work with.

Meanwhile the kids played screens. All of them. Until the screens died and the kids made a b-line for the room next door where they played.

At one moment the meeting traveled the world. We heard how occupation strategies had been used successfully in Brazil, how in Barcelona Advice Assemblies had powerfully enabled evictees to help each other without relying on lawyers, how the American community organiser Saul Alinsky had argued that you should ‘personalise’ your enemy. I was introduced to the group as someone who wanted share the work of Reclaim the City with others around the world. There was a sense that this hyper-local meeting had the capacity to transcend Cape Town.

The meeting finished with a song, of course. An anti-apartheid anthem sung with a beat, chorus and solo. I tried to look like I knew what I was doing, but I’m pretty sure that I didn’t convince anyone.

At the end we took a photo, fists in the air – including the fist of my 9 year old son. There was a feeling of hope. Not “Obama” hope. Not “waiting for someone to save us” hope. But a “we are going to build this for ourselves” hope.

As we walked out of the building, up then down the squelchy staircase I could hear singing. It was the families getting back on the bus that was returning them to the Woodstock occupation. It was the voices of people who had the feeling that they knew what is possible. They already lived in a functioning, self-managed, community-run occupation. And joyfully they were not yet satisfied, because their city was not free. They knew that this place needed more. And so they sang because they would reclaim their city.