GetUp have been experimenting with a new donation form structure. Our previous donation form took place entirely on one page. The donor would input their email address, then provide any additional personal information, then select a donation amount, then provide credit card details.

A screenshot of part of the old GetUp donation form. 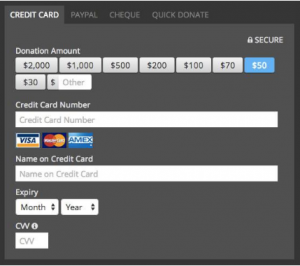 The GetUp tech team has developed a new form and separates the parts of the donation process onto three separate pages:

The first version of the multi-step form (first page). 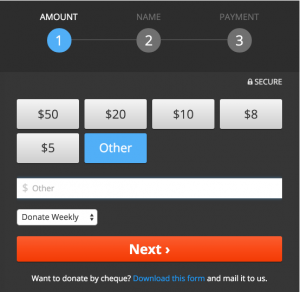 We have run a series of two experiments to test the effectiveness of the new form. After an original experiment was inconclusive, the second experiment demonstrated that the new form was slightly better than its predecessor.

Structure of experiment – round one

Results of experiment – round one

The multi-step form produced slightly more donations than the conventional form, at a statistically significant level. However, there was a slight decline in the average size of donations, from $33.78 to $31.96.

This data excludes a small number of large donations that skewed the average donation size.

Conclusions from experiment – round one

Following the first experiment, the tech team redesigned the ‘other’ part of the form to integrate it more closely with the other donation buttons. You can see the final version of this part of the form on the website here.

This version was integrated in the second major experiment. We thus designed a second experiment to try and find ways to encourage more donors to choose larger donation amounts, while still ensuring a larger conversion rate.

Structure of experiment – round two

In addition to the conventional form and the multi-step form as originally designed, two additional versions of the form were added:

The multi-step form with ascending amounts was a clear winner. The average donation size and conversion rate were both highest for this form.

This experiment did not produce ground-shaking results, but does appear to have produced an increase in the number of donations through our new donation form.

We have implemented this new form, with ascending amounts, across our website.

The final version of the form. 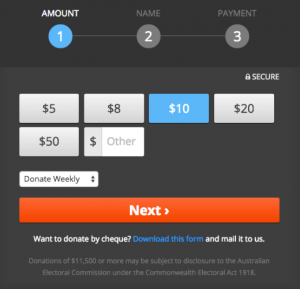 To blurb or not to blurb in fundraising modules

Select your donation amount in email Does it work?

10 tips from GetUp's decade of campaigning