The new film Franklin opens in cinema on 4 September. The film combines reflections on the Franklin campaign with a personal journey – Oliver Cassidy retraces his father’s 14 day expedition to join the protests. Find out more about the film and the campaign that inspired it with this collection of resources.

What can you take out of this for today? That you can make a difference. That you should work for something you believe in and not give up. – Cathie Plowman, Franklin campaigner

Film – Franklin: A Journey to the Past a Quest for the Future, Rock Island Bend Productions, 2022

Eighth-generation Tasmanian and environmentalist Oliver Cassidy embarks on a life-changing solo rafting trip down the beautiful yet remote Franklin River. His goal is to retrace his late father’s 14-day expedition to attend the blockade that saved the World-Heritage listed national park from being destroyed by a huge hydroelectric dam project in the early 1980s. Featuring never-before-seen archival footage and interviews with key players such as Bob Brown and Uncle Jim Everett, the eight-year-long ‘Franklin campaign’ is revealed as the most significant environmental protest in Australia’s history; an inspiring example of the power of non-violent direct action to bring about lasting change. Physically challenged beyond his limits, Oliver’s journey is one of healing and deeper understanding as he searches for the right way to say ‘goodbye’ to his father. Listen to a podcast about this film on ABC Radio National. Check the Screenings to find out how you can view the full film.

Watch a 20-minute documentary, including footage of various blockade actions. It can be viewed in two parts.

The Story of the Tasmanian Dam Case, Chris McGrath, 2015

The story of the Tasmanian Dam case in 1983 from a lecture on Commonwealth environmental laws at The University of Queensland, Brisbane, Australia, given by Dr Chris McGrath in 2015. 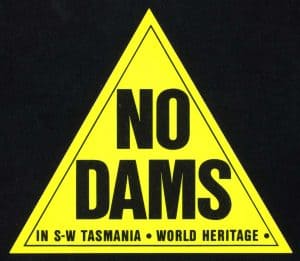 Unpublished Book – Effective action for social change: The campaign to save the Franklin River This publication written in 1986 by 5 activists who were involved delves deeply into the history of the Franklin Dam campaign and the differing methods of organisations and tactics that activists used, including in relation to the 1983 election. See Timeline on pages 10 – 11 in PDF.

Brief case study of the campaign from the Global NonViolent Action Database.

Read more about the blockade – In 2013 Franklin blockader Alice Hungerford produced the book UpRiver: Untold stories of the Franklin River activists. Including numerous photos this oral history brings together memories from the group of activists who camped in the forest for months on end to support and organise daily blockading actions. Purchase a copy.

Step back in time by reading this newspaper article from The Age on January 14, 1983, titled ‘Boat runs through dam protesters’.

The greatest environmental battle in Australian history was also its greatest act of civil disobedience. But the story of saving the Franklin runs far longer, and involves far more people, than its best remembered element, the blockade.

Key Franklin campaigners share what they learnt. The following quote and Cathy Plowman’s quote at the top of this page are drawn from the article.

The ground rules are collaboration and respect. It means that people working together, being astute and being respectful, can leave the world a better place. – Karen Alexander

Read the legal judgment of the Tasmanian Dam Case. 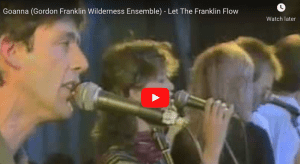 The Franklin River blockade became one of the most iconic in Australian history, stopping the damming of the river and bringing footage of rugged forests and civil disobedience into loungerooms of the country on the news. Members of Goanna (playing as the Franklin Gordon River Ensemble) soundtracked the blockade with the singalong anthem Let The Franklin Flow.

A short podcast on the Australian Franklin River Dam protests including, what happened, who was involved and what changed in Australia as a result.