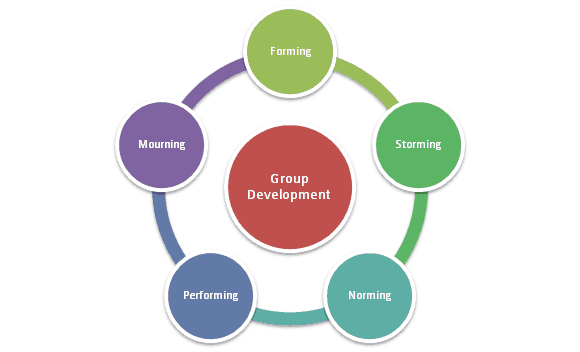 A handout and process guide for training workshops focused on working in groups and organisational effectiveness. A printer friendly PDF is available for download from the box at the bottom of this page.

Groups initially concern themselves with orientation and establishing relationships with leaders, with other group members and or pre-existing standards.

The second point in the sequence is characterized by conflict and polarization around interpersonal issues, with concomitant emotional responding in the task sphere. These behaviours serve as resistance to group influence and task requirements.

Resistance is overcome in the third stage in which in-group feeling and cohesiveness develop, new standards evolve, and new roles are adopted. In the task realm, intimate, personal opinions are expressed.

Finally, the group attains the fourth stage in which interpersonal structure becomes the tool of task activities. Roles become flexible and functional, and group energy is channelled into the task. Structural issues have been resolved, and structure can now become supportive of task performance.

Later Tuckman added another and final stage of group development which involves dissolution. It entails the termination of roles, the completion of tasks and reduction of dependency. Some commentators have described this stage as ‘mourning’ given the loss that is sometimes felt by former participants. The process can be stressful – particularly where the dissolution is unplanned.

40 minutes to one hour

Print A4 pages with the name of each of the four stages in large font. Display these on each wall of the workshop space (before or during the workshop).

Divide the workshop group into four roughly equivalent groups. Give each group a piece of paper with the description of one of the four group development stages (but without the name of the stage). Instruct groups that their task is to:

Invite each small group to report back and share with the larger group. Lead into a plenary discussion.

Download a printer friendly PDF from the box at the bottom of this page.