Courtesy of the Search Foundation

Opposition to military conscription during the Vietnam War took many forms, ranging from conscientious objection and non-compliance through to draft resistance. Concerted campaigning from 1965 to 1972 saw resistance to the war grow from modest roots into a mass movement that abolished National Service and led to the withdrawal of Australian troops.

This excerpt from Bobbie Oliver’s 2021 book Hell No! We Won’t Go! Postwar Resistance to Conscription in Australia describes one of the first campaigns to draw attention to the issues, that of NSW school teacher William White.

William Phillip Orrick (‘Bill’) White was a school teacher who lost his position in the NSW Education Department because of his stance against conscription.

In November 1965, White had applied to be registered as a conscientious objector (CO), giving as his reason his inability ‘with a clear conscience, [to] kill a person, or be part of any organisation that is able or willing to kill or make war’.

White represented himself at his application for total exemption in the Phillip Street Court of Petty Sessions on 20 December 1965. The prosecution pursued banal issues, such as: whether (as a teacher) he would ever ‘chastise’ a child; whether he would ever use the cane on a child; and whether he believed that penalties should be exacted on law-breakers – none of which involved killing. White was also asked whether, in paying taxes, he was belonging to ‘an organisation?’ Although he had stated that he would never ‘take part in any form of activity that would take a life’, the prosecution pointed out that White held a driver’s licence and asked him whether he knew what the annual road toll in NSW was. When White said that he didn’t think this line of questioning had anything to do with war, he was told by the bench that the purpose was to ‘try to understand your beliefs.’ White’s application was dismissed, and he was ordered to perform non-combatant duties. He appealed.

White’s appeal was dismissed in the Sydney District Court on 22 March 1966. In June, he received a notice to report to the Eastern Command Personnel Depot on 18 July. When he failed to comply with his call-up notice, his employer, the NSW Education Department, dismissed him, complying with the National Service Act (NSA), which stipulated that an employer would be liable for a $200 fine for continuing to employ a person who was refusing to enlist. Despite this, a Mr Douglas McPherson offered White a job tutoring his son, aware that he was also risking a fine. His action spurred a wave of support from children and parents at White’s former school.

A group of parents, teachers and other supporters formed the Bill White Defence Committee and appealed for assistance with White’s mounting legal fees. They also challenged the legislation that resulted in White’s dismissal by the Education Department. McPherson spoke with officials of the Department of Labour and National Service, seeking an amendment to the Act that would remove the clause requiring employers to sack employees who were refusing to undertake military service. Despite promises, the Act was not amended.

White was summonsed to court on 3 August and charged with refusing to comply with the NSA, but the court was adjourned when about 50 women and children staged a protest outside the courthouse. White’s life was in limbo until a further appeal was heard in November. This time, he was appealing against the ruling that an objector could make only one application to be registered. There was nothing in the Act that specified this. While awaiting the hearing in November, he applied for unemployment relief, was rejected, and was then granted a ‘special payment’ of the same amount. His application to reapply for registration as a CO was dismissed on 9 November. On 17 November, Rodgers SM committed White to military custody.

Tense days passed while White awaited arrest at his parents’ home. He had received 500 letters of support and only three (anonymous) letters criticising him, with supporters ranging from school children to a Gallipoli veteran. On 22 November, The Sydney Morning Herald suggested, mockingly, that the Australian Army was observing ‘Procrastination Week’, because of their tardiness. Some believed that the arrest wouldn’t take place until after the federal election on 26 November. A band of up to 30 supporters kept a round-the-clock vigil outside White’s home, to avoid the possibility of his arrest in the middle of the night with no cameras present. They nailed placards to the front fence, one of which said: ‘Brave enough to say “No”’ – a reference to the charge that objectors were cowardly. Despite the support, White admitted to feeling the strain, which also impacted on his fiancée, Clare Seale.

White’s forcible arrest on 22 November, with photographs appearing in the press of the teacher being dragged between two hefty police officers, provoked outraged letters. One, from 15-year-old John Briot in The Sydney Morning Herald of 25 November, asked: ‘What kind of a “democracy” is this where actions of conscience are so treated?’ Courtesy of the Search Foundation

Media interest in White did not diminish after his arrest. The Sydney press reported daily on his internment at Victoria Barracks in Paddington – when he received visitors (including his mother and fiancée) and the punishments he endured. On 29 November, the army court-martialled White, for refusing to wear a uniform or obey orders, and sent him to Holsworthy. While he was there, the press could do no more than speculate on his conditions of incarceration. Possibly because of his high profile, White seems to have been treated well – or, at least, much better than some later internees at Holsworthy.

To his credit, Rodgers SM, who had dismissed White’s first application, believed that it was not in White’s interests for him to hear the new application. He referred the application to Sydney’s Central Court, where it succeeded. Despite the verdict, White wasn’t immediately reinstated in the Education Department. Apparently, a majority of the public agreed with the department’s reluctance. A Gallup Poll of 1,700 people in February 1967 found that only 23 percent believed that White should have been granted exemption. Of the 72 percent who believed that he should have been made to complete his military service, however, only 15 percent thought that he should have served as a combatant. This poll may indicate that White’s principled stand had begun to influence public opinion. 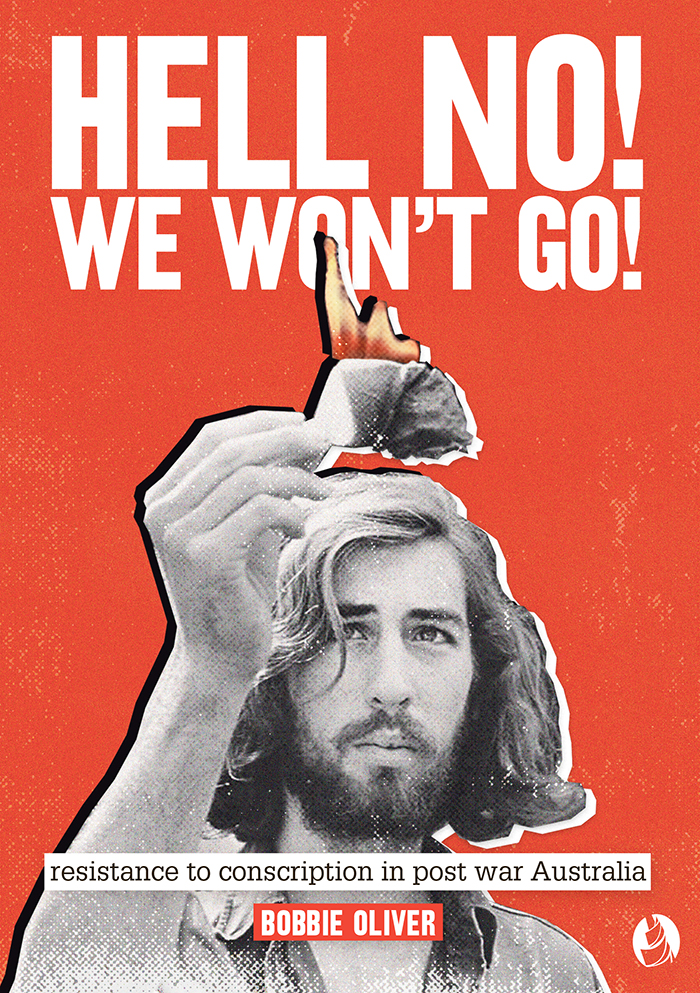 Hell No! We Won’t Go! Postwar Resistance to Conscription in Australia draws on court records, private correspondence and newspaper accounts to record the stories of many young men who resisted the National Service schemes of 1951-59, and 1965-72. It can be purchased here.

Images courtesy of the Search Foundation.